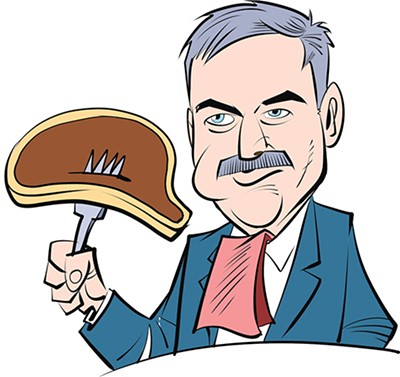 There are more cows than people in the state of Oklahoma, and by goodness, it’s about darn time to recognize the hard workers of the state’s agricultural industry, according to State Senator Casey Murdock.

Murdock authored Senate Bill 21, which would designate the rib-eye as the state steak, in a move to honor and promote the state’s ag industry, according to KFOR. Murdock is a rancher based in Felt.

“I don’t want to say it’s a cheerleading bill, but it’s promoting an Oklahoma product,” Murdock told KFOR. “We get beat up on different issues. We’re last in education; we’re last in this and that, and we need to promote what is good in that state also.”

The state’s official bird, of course, is the ubiquitous scissor-tailed flycatcher. The state’s beverage is milk, and its official vegetable is the watermelon, which is technically a vegetable even thought most people eat it as a fruit.

We’ve got our calendars marked every spring as tourists flock to Oklahoma to eat watermelons. … Wait; no we don’t because that doesn’t happen.

While we’ve heard complaints that establishing another state emblem is a waste of time for the Legislature in a state with many other issues, the truth is that it really isn’t that big of an issue.

“They say, ‘Oh, you are wasting your time down there.’ We are running bills anyway; this is just running a bill that is going to promote a business in Oklahoma,” Murdock told KFOR, noting that there are 5.2 million head of cattle in Oklahoma.

The environmental implications of that much methane released in the atmosphere aside, that’s a lot of cuts of beef for your potential plate. We at Chicken-Fried News agree that the rib-eye is the best cut of beef. While a filet might be pricier, it doesn’t get the benefit of flavor produced from the extra fat in the rib-eye. Whatever you do, don’t order it well-done and cover it in ketchup.