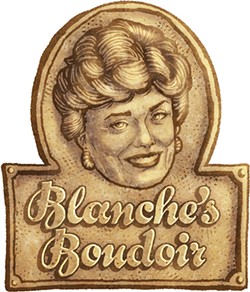 The bounty of cartoonishly ridiculous news stories that result from an internet search for “Florida man” is well known. At the time this was written, for example, the top two results were “Florida man caught with Trump-shaped ecstasy pills” and “Florida man attacked by a kinkajou [a South American raccoon-monkey] waiting at the front door.” Searching for “Oklahoma man,” [as in “Oklahoma man shoots Taco Bell employee after he’s asked to pull forward in drive-thru”] meanwhile, doesn’t usually make our state look any better. But last week, a search for “Oklahoma woman” would have brought up this delightful headline: “‘Thank you for being a friend’: Oklahoma woman rents out ‘Golden Girls’ themed AirBnB.”

Proprietor Lori Harrison told Fox News 12 that she was “surprised, honestly, how much interest there has been,” but by decorating a three-bedroom house on the property of Rue “Blanche Deveraux” McClanahan’s childhood home in Ardmore with “banana leaves and wicker furniture” and dedicating rooms to the sitcom’s beloved characters, Harrison is not only providing visitors a memorable experience, but in essence constructed a small mental Airbnb for news readers amidst the ongoing horror show that is reality circa 2019.

So let us all take a brief respite from whatever fresh hell is currently dominating the day’s news cycle to picture four Florida women — sex-positive Blanche, sarcastic Dorothy Zbornak, gleefully sadistic Sophia Petrillo and sweetly naïve Rose Nylund — living their best lives and taking often impressively progressive stances between forkfuls of midnight cheesecake. Thank you for being a friend, indeed.