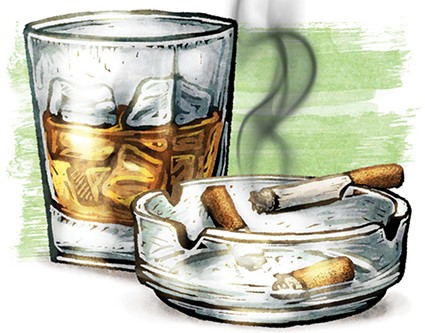 Thanks to Oklahoma’s Legislature, which Fox 25 reported failed to pass the Oklahoma Workplace Clean Air Act this session, we will continue to be among the dwindling number of cool states that allow you to smoke inside bars. Call us the last of a dying breed.

While some might argue we would be a lot cooler if we were to not have the highest incarceration rate in the world and underpaid bar staff might think it would be cool to not run an increased risk of heart disease and lung cancer in a state that consistently ranks as one of the worst in the country for access to health care, Oklahomans apparently want to project the brand of cool typified by Danny Zuko and Andrew Dice Clay: leather jackets, sunglasses and a lit coffin nail dangling from the lips.

“30,000 Oklahoma workers are exposed to secondhand smoke as part of their job," Julie Bisbee, executive director of Oklahoma Tobacco Settlement Endowment Trust, told Fox 25, possibly while dodging spitwads and paper airplanes launched by legislators. "We know there is no safe level of secondhand smoke, and that continues to put workers' health at risk.”

We’d blow a big raspberry at that citing of surgeon general research if we had the lung capacity for it. Joining us in Saturday detention are the 11 other lovable bad-boy states without statewide smoking bans in workplaces and bars: Alabama, Arkansas, Georgia, Kentucky, Mississippi, Missouri, South Carolina, Texas, Virginia, West Virginia and Wyoming, aka the states everyone agrees are the coolest.