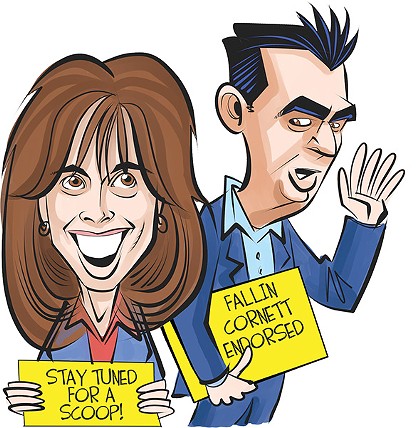 As grizzled veterans of election coverage, the Chicken-Fried News War Room analysts know that endorsements during political campaigns are hard-fought and sometimes make about as much sense as the last skit on any given Saturday Night Live episode. And last week, we were left scratching our heads so much we drew blood.

You see, we spent most of August hearing “Bull Stitt” this and “Bull Stitt” that from Republican gubernatorial contender and former Oklahoma City mayor Mick Cornett as he hammered at Gateway Mortgage Group founder/sentient eyebrows Kevin Stitt during the runoff election. In Cornett’s “Bull Stitt” ad, he quoted a 2009 Business Insider article naming Gateway Mortgage “one of 15 Shadiest mortgage lenders in the United States” and poo-pooing Stitt’s claims that Cornett was in favor of sanctuary cities by having elderly white people/likely voters say, “That’s just Bull Stitt.”

Yes, “Bull Stitt” was the “C’mon … Ted” of two months ago. It was a little clumsy as political advertising goes, but say what you will; if Stitt gets elected governor and then proceeds to do absolutely nothing about education, teachers’ wages and the economy, “Bull Stitt” will stick to him like fresh … you know, we can’t think of anything that could fully fit to sully Stitt in such a scenario, but we’ll get there with a few rhyming exercises or something.

Then, just as the CFN News Team was starting to forget about that turn of phrase, KWTV’s Robin Marsh dredged it up again in promos for her much-hyped interview with Cornett, presented as kind of a postmortem of his campaign and a referendum on whether saying “Bull Stitt” too much can hurt a candidate’s prospects. At the end of the promo, Marsh asked Cornett if he would endorse Stitt. He was then showed deep in thought — possibly pondering the question, possibly thinking, “Hey, when are we going to talk about my new book, The Next American City: The Big Promise of Our Midsize Metros, published by Penguin Random House?”

The interview was scheduled to air 10 p.m. Oct. 11, and KWTV ran the promo during nearly every newscast for days. Then, the day before it was scheduled to air, CFN got a special delivery in our email from the Stitt for Governor campaign: Cornett was endorsing Stitt.

“My campaign for governor was about holding high expectations for Oklahoma to succeed, improving our education system, and expanding opportunity for all,” Cornett said in the prepared statement. “To accomplish this, we need strong, trustworthy leadership to unify our state and get our fiscal house in order. I believe Kevin Stitt is the right candidate to move Oklahoma forward, to raise the standards on education and health, and to demand better outcomes from our state government. Please join me in voting for Kevin Stitt on Nov. 6.”

Not only did the Stitt campaign step all over Marsh’s big story — our condolences, Robin — but Cornett invalidated everything his ads said in the final weeks of the runoff. In CFN’s calculation, “trustworthy” is the polar opposite of all that “Bull Stitt” noise.

There’s a word for this. Again, our faculties are failing us on this subject.