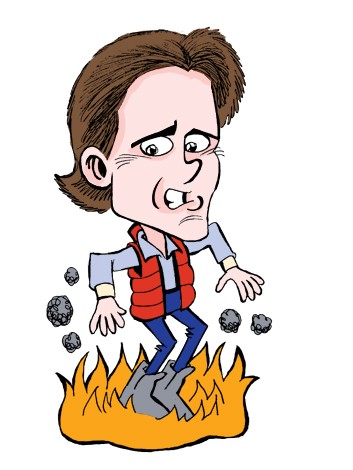 The future is now, and it’s not nearly as cool as Marty McFly wanted us to think it was. Yes, we have drones with cameras attached to them (hovercams) and FaceTime and Skype (video telephones), but McFly could have at least warned us about the exploding hoverboards!

Before we let you in on the latest news, let’s get real for a second and admit they don’t actually hover at all — they have wheels, for Pete’s sake! They should have spent a little more time naming the things and researching batteries and a little less time trying to trick people into buying their newfangled gadget.

“Hoverboards” have been bursting into flames all over the place and getting banned left and right. Come on; do airlines really need to explain to people over and over again why they’re not allowed on airplanes?

And before you decide you can get away with cruising to class on one of those rad-looking, combustible two-wheelers, think again.

You can’t ride them, carry them or store them. Betz banned them “to maintain campus safety and remain in compliance with its fire protection and prevention efforts.”

KFOR.com reported that Oklahoma State University banned them Jan. 8 and the University of Oklahoma started considering them contraband Jan. 11.

That means if you have one hidden in your dorm room, next to your illegal hot plate and rice cooker, you need to get rid of it.

Don’t think we won’t find it, sonny; we know all of your hiding places — we were you a couple of decades ago.

But really, if the United States Consumer Product Safety Commission is concerned, you should be too.