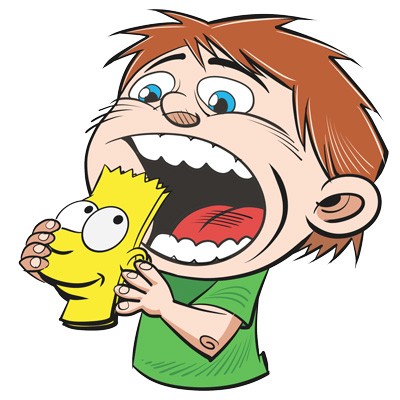 Sure, it’s easy to tell an adult not to eat something shaped like Bart Simpson’s dumb head, but try telling a kid that.

Police in the small Pittsburg County town of Hartshorne faced this conundrum head-on and warned residents about the perils of eating unknown substances shaped like fun stickers earlier this month after they received a call about pills found on the ground near the corner of 12th Street and Cherokee Avenue.

KFOR.com reported the pills were shaped like a grenade, a heart and Bart Simpson’s noggin — a fourth was crushed beyond recognition. The news station also reported that officials said the pills were ecstasy and not just some fun, slumber party candy-making session gone awry.

We’re not exactly sure why a dealer or pill-taker would leave their whimsically shaped drugs on a random street corner, but a Facebook post by the Hartshorne Police Department warmly invites them to visit and talk to the police chief about their lost items.

The post also warned residents not to disturb crime scenes and to immediately call the police station if they found something odd on the ground, but they were much nicer about it than we would have been.

So, as drug dealers get more creative about ways to peddle their wares to your unsuspecting, innocent children, it’s probably best to explain that it’s never a good idea to eat something shaped like cartoon characters or anything you’d find drawn in a coloring book unless you’re 100 percent sure about what it’s made of.