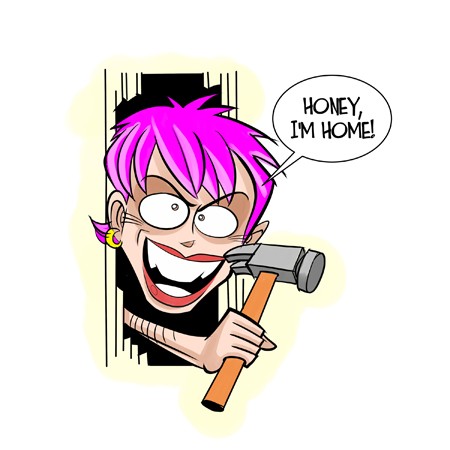 Christmas came early for an Oklahoma City man when his fiancée tried to give him a hammer. Unfortunately, she decided to test it out on his home, located near NW 159th Street and San Miguel Circle, OKCFox.com reported.

Dec. 8, the man called Oklahoma City Police to report his girlfriend, Jennifer Finley, 59, was banging on his front door with a hammer.

Officers who responded to the call said they found Finley inside the house, holding a sharpened broomstick in her bloody hand. When asked what happened, police said Finley responded, “Do you have something against women, you fucking assholes?”

According to OKCFox.com, the homeowner told police he and Finley became engaged after a dating for the last year, but when he went to a bar on Dec. 7, she thought he was cheating on her.

When she arrived at his house started banging on the door, he locked himself in his room and called the police, according to OKCFox.com. Then he said he heard glass break and Finley inside the house, banging on the walls.

Finley was arrested on suspicion of first-degree burglary, destruction of property and destroying private property.

The homeowner could really use the hammer if police let him keep it. Officers said the encounter left holes in the hallway walls.

None of this bodes well for Santa Claus, either. Something tells us the man won’t be happy to hear tapping on his rooftop or the sound of a red-suited visitor inside his home on Christmas Eve, no matter how many presents Saint Nick brings.