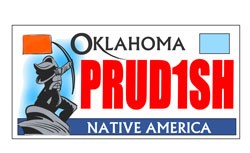 An Oklahoma man was told his support of a marginalized group of people was too sexy recently when the Oklahoma Tax Commission denied his request for a personalized license plate on the grounds that it was too sexual in nature.

The requested tag read LGBTALY, which if you read it very closely, or not closely at all, reveals itself as not sexual at all. Less so considering plates that are (or that we’d like to see) approved, like ATHEIST or GB4LIFE (Garth Brooks? Game Boy? We wanna know!), or borderline-offensive DMB GIRL, IDIOT, too-awesome F CANCR or even slightly narcissistic plates like 2DEEP4U, which could swing either, um, way — either too sexual or slightly too boneheaded.

Anyway, now that we have the tax commission deciding what is too sexy for us, maybe it will do something about those downright salty 1099 forms.