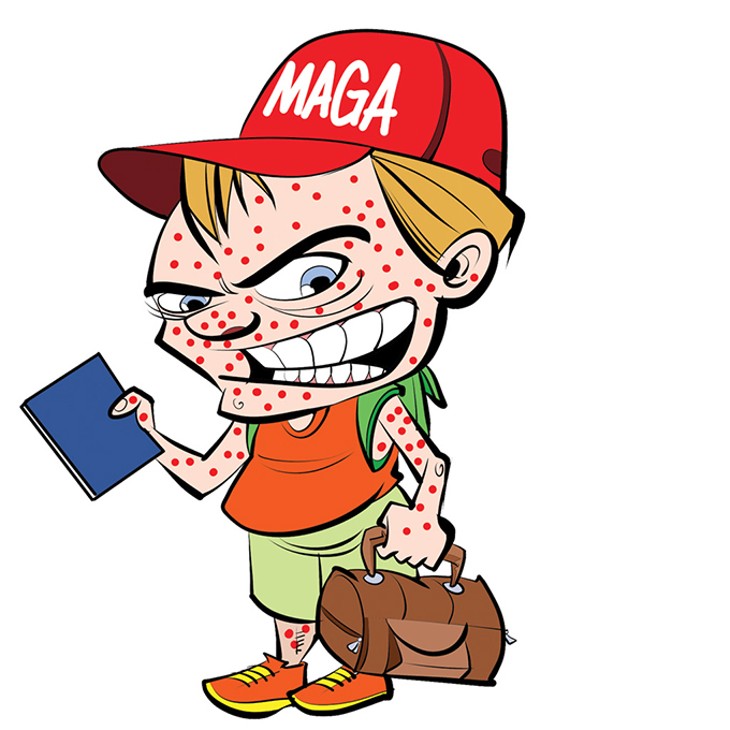 When people talk about measles, it’s usually in the past tense, as in “Aren’t you glad we don’t have to deal with yaws, rubella, smallpox and the measles anymore? Pass the avocado toast and don’t Bogart the mimosa pitcher!” But our carefree existence of Sunday Fun Days and discussing the new season of The Bachelorette was shaken by old-world problems when an Oklahoma County resident returned from overseas with a fresh case of the damned measles.

According to The Oklahoman, officials with Oklahoma City-County Health Department report that the unidentified person stayed at home during the infectious period and was not roaming around, licking playground equipment or dipping ice cream. Still, the department encourages residents to check their vaccination statuses, especially if they are planning to travel overseas to look for jobs outside the radius of the upcoming trade war.

The Centers for Disease Control and Prevention — that building in Atlanta that Sheriff Rick Grimes and his non-zombie buddies were trying to get into at the end of the first season of The Walking Dead — reports that measles were eradicated from the U.S. 18 years ago. Still, it’s entirely possible for unvaccinated people to contract the disease if they go overseas and then return to, say, attend a handshaking convention or walk around a retail store completely naked.

So really, Bob — Chicken-Fried News is going to call you Bob since we don’t know your name — why didn’t you get your shots before you went globetrotting? Have you been listening to Jenny McCarthy again? We swear, if people don’t get off this anti-vaxing kick and start embracing proven science again, we’re just going to have to stop having fun in public.