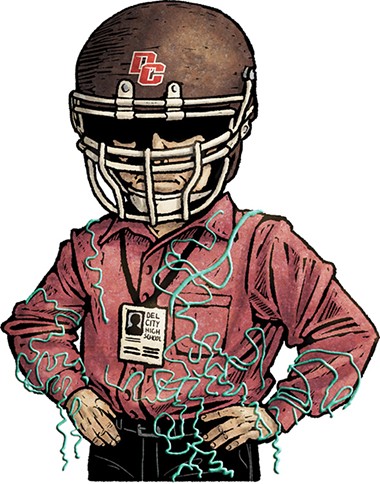 While everybody was abusing the new “gender swap” filters, a Del City High School teacher was captured on Snapchat taking down a student.

The video shows a student wearing a mask opening a classroom door and spraying the unsuspecting teacher with Silly String as part of what is a very uncreative, untimely and insensitive prank. Unfortunately for the prankster, the teacher has been paying attention to countless tragedies happening at schools across the country, so he jumped into action to pin the student down.

We commend the teacher for his quick action, self-defense skills, general badassedness and commitment to keeping his students safe, but apparently not all parents feel the same.

“There was no reason to physically put your hands on a child over silly string,” said an anonymous parent who submitted the video to News9.

The parent, who has no relation to the student in the video, was asked what she would say to those who believe teachers can never be too careful about school safety in today’s environment.

“I would say they might be able to use an excuse like that if they didn’t have prior knowledge that this was happening,” she said, referring to the fact that some knew the senior prank would include Silly String. “If the teacher did not know this was happening, still I think he could have had a different recourse.”

With all due respect to the parent, read the room. We are confident in saying most people would much rather a masked student prankster be harmlessly disabled than have another tragedy on our hands.

Teachers should not have to worry about defending students from unidentified masked intruders, especially for a prank. Thankfully, the Mid-Del School District released a statement supporting the teacher’s actions: “A Del City teacher acted to remove the potential threat from his classroom. … We take all threats seriously.”

The student will face additional punishments besides going semi-viral for getting taken down by his teacher.