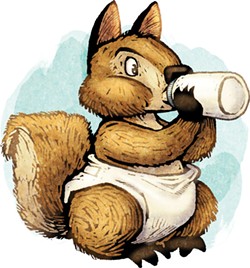 The prevalence and expansion of therapy and service animals has really blown up in recent years. There’s as much oversight for online certification of service animals as there is on preventing the spread of COVID-19 in the U.S.

A woman recently brought a miniature horse on flights from Michigan to California, and it raised the ire of many social media commentators. What doesn’t, though? To be fair, the horse does help her pick up things when she suffers flare-ups of Crohn’s disease, but the optics of bringing a small horse on a plane are quite odd.

A woman outside Tulsa might’ve considered getting a baby squirrel she found registered as a therapy animal, but she’s got bigger things to worry about. During a traffic stop, Glenpool police searched the woman in the passenger seat and found a pound of meth, scales and baggies, according to Fox 23.

They also found a baby squirrel and a dropper of baby formula in her bag. She was charged with possession of wildlife during a closed season. The Oklahoma Game Warden’s office told Fox 23 that people who find wild animals and contact their office will not be prosecuted.

There is risk that people can make health matters worse through improper care, and if an animal is domesticated, it can’t survive in the wild. Just imagine how cute a therapy squirrel would be, though. Note: Chicken-Fried News does not condone the unsupervised domestication of wild squirrels.