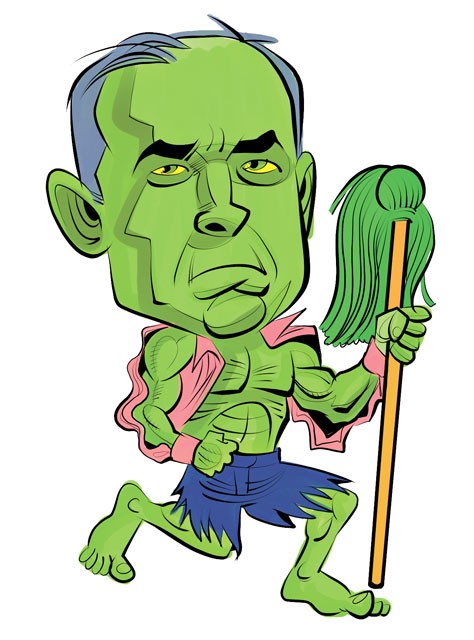 In the nearly full year since President Donald Trump took office, America has gotten to know Environmental “Protection” Agency Administrator Scott Pruitt as the kind of guy who, figuratively speaking, fries up factory-farmed pork chops over a methane-fueled blue flame emerging from your neighbor’s kitchen faucet.

Now, thanks to “Wasteland,” a recent episode of Fusion cable network’s documentary series The Naked Truth, U.S. viewers can see how Pruitt cut his teeth as an energy industry toady during his time as Oklahoma’s attorney general.

The Chicken-Fried News team popped some non-GMO, free-range popcorn and tuned in as reporter Natasha Del Toro took a toxic tour through Oklahoma. Del Toro visited sites of notoriously awful Arkansas River fish kills and chemical contamination that have impacted the Ponca tribe and spoke with Cushing residents impacted by the 4.2-magnitude earthquake that struck near the massive oil storage hub on July 14, 2017.

She also interviewed Sherry Walls, a Ponca City woman whose family was devastated by a methane gas leak under the family home. Fearing a gas explosion, the family was forced to relocate to short-term rental housing and hotels for several months.

Walls wrote a letter to Pruitt’s office asking for assistance regarding the leak, which contaminated the property to such a degree that soil from the Walls’ yard became flammable. Pruitt’s office asked Walls to file a formal complaint, and then, according to Walls, never took action on the ensuing complaint. Two years later, according to the Fusion documentary, Pruitt filed suit against the EPA to block the agency’s methane regulation, one of 14 he filed before becoming chief of that which he despised.

The stresses of the family’s battle to keep their home and find solutions for the methane leak reportedly led to the 2016 suicide of the Walls’ 21-year-old son Kyle and the Father’s Day 2017 suicide of Sherry’s husband and Kyle’s father, Chris.

Now that we think of it, he should probably get credit as a producer.