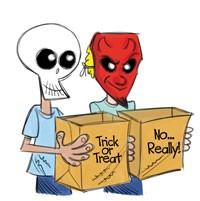 Two local convenience stores were recently robbed by a masked bandit, and police wanted help finding him. Or her. It.

The robber, wearing what appeared to be a skull mask, surprised the clerk after creeping around store displays. Then the robber started waving a gun. To that, the clerk laughed again.

Indeed, that was it, and he handed over cash. But the masked crusader wasn’t finished. Police think the two-faced suspect then donned a devil mask to rob another location. The second clerk didn’t get the joke, probably because the robber forced her to the floor before swiping the money. No joke.