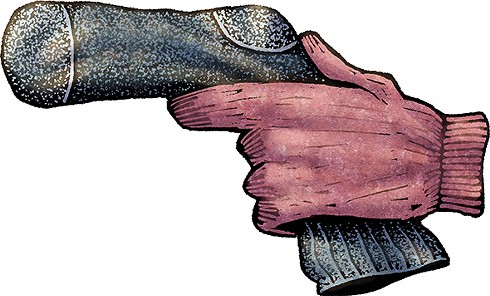 A Tulsa man is giving Glocks to the homeless. Don’t worry; it’s not what you think.

Ray Neal — or as he’s known across social media, BiggestRayRay — isn’t actually giving away guns. By his own admission, giving firearms away to people is “likely a bad idea.” Instead, he created a grassroots movement called Glocks for the Homeless, which aims to keep homeless people warm during winter by giving them gloves and socks. Get it?

Neal’s mantra is “Be biggest.” He wants to live every day as biggest as possible. In that spirit, he came up with a unique way to bring more attention to the homeless population in his community. His strategy is to “trigger people into wanting to help,” and it seems to be working. It is misleading, but that is the point. Neal wants to get people’s attention and then their donations.

By intentionally playing up the portmanteau “Glocks,” he is actively trying to get people to click on his social media links out of disbelief or anger or maybe even excitement. This is Oklahoma, after all, and we wouldn’t totally put it past an Okie to think giving homeless people guns is a great idea. In fact, everybody should probably knock on wood before a bill is introduced at the Capitol.

This isn’t the first time Neal is giving back and helping others. He actually began Glocks for the Homeless last winter through a GoFundMe to get money for supplies. Though he only raised $280 on his campaign, which is still accepting donations, he got a lot of local attention and people wanted to know how to get involved. That year, Glocks for the Homeless was able to distribute more than 100 Ziploc bags full of supplies.

This year, he has a team of volunteers to help him collect and package the items into “go bags.” Each bag has two pairs of gloves and socks, hand warmers, lip balm and other items people need during the winter. He wants to distribute 500 more go bags to homeless people all around Tulsa.

When the Chicken-Fried News staff first heard about Glocks for the Homeless, we were already rolling our eyes at what sounded like another national embarrassment in a month full of national embarrassments. We were pleasantly surprised that Neal was subverting expectations and using that to do something positive for his community.

Be biggest, Ray Neal. Be biggest.