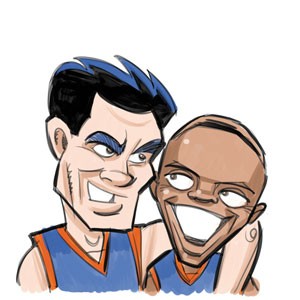 The Oklahoma City Thunder recently played (and lost) a preseason game against the Utah Jazz, and there are a lot of new faces on the court.

However, two familiar faces recently appeared in a new NBA commercial that showed their skills off the court.

In it, Reggie Jackson and Steven Adams can be seen devising a new head-nod code. Their banter is adorable and they have chemistry that makes the whole bit feel natural. And it’s hilarious.

A head-jerk with a slow nod, raised eyebrows and slight shoulder shrug: “Off the court? You’re, like, the man,” says Adams. “And on the court, if I do it, you have to pass me the ball.”

Jackson responds: “I have to pass you the ball?”

Adams: “You always have the ball!”

With a 2-5 record for the preseason and Kevin Durant being out for a while, this ad reminds us that the pair have chemistry, are working together and, maybe, now that we all know how they work together, they can get back on the court and keep practicing.

And, you know, create a not-so-secret nod for when Thunder beats the pants off the Portland Trail Blazers tonight (and then wins through the rest of the season, right, guys?). Might we suggest two slow nods while snarling, followed by a maniacal laugh? Because that would totally catch on.