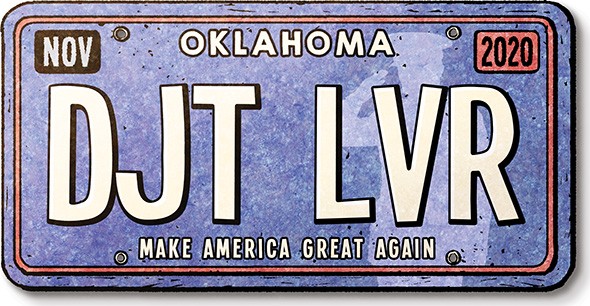 It’s almost time for the legislative session, which can mean only one thing: unconstitutional and/or ridiculous bills that will waste lawmakers’ time and energy and distract from more important matters.

We’re sure you’ve already seen a few, like the one by a Republican senator to name a section of Route 66 President Donald J. Trump Highway or the one to make 2020 the “Year of the Bible.” Both happen to be by the same senator, who also wanted to make all state wildlife the property of “Almighty God” in last year’s session.

If it wasn’t dreadfully obvious that this senator’s bills are just a desperate cry for attention, he-who-shall-not-be-named (because let’s face it; he wants his name in as many news outlets as possible) also filed a bill to put Trump’s campaign slogan on state license plates. The senator wants Trump’s precious attention so badly, he probably didn’t even realize the bill could violate federal campaign finance laws.

The legislation would create “Make America Great Again” and “Keep America Great” plates, just in case you’re not sure where the country stands. Both of the phrases are trademarked slogans of Trump’s campaign. Tags would cost $35, and proceeds from the sales will benefit two state organizations that provide services for veterans, the Folds of Honor and Warrior of Freedom foundations. Still, if taxpayer dollars or resources are used to make the plates, the proposal would violate campaign finance laws.

“These are political slogans,” Richard Briffault, a professor at Columbia Law School, told The Washington Post. “This has the look and feel of using state resources to support a political candidate, which seems improper … and possibly illegal.”

However, Paula Ross with Oklahoma Tax Commission told the Post that rules against personalized plates that are discriminatory, threatening or overtly political don’t apply to decisions made by the state Legislature.

Even if legal, the bill is a huge waste of time lawmakers could actually spend on practical, problem-solving legislation. They could even use their time to craft legislation that would directly benefit veterans without pandering to a certain political party. Not only that but Veterans of Foreign Wars Department of Oklahoma has opposed the bill and is encouraging other veteran groups to do the same because “veterans, and their families, should not be utilized as leverage to promote a political ideal or agenda no matter what party it represents.”

In summary, this is a ridiculous, possibly illegal bill that even some of the very people it seeks to benefit don’t want. That probably means there’s a good sign the governor will end up signing it.