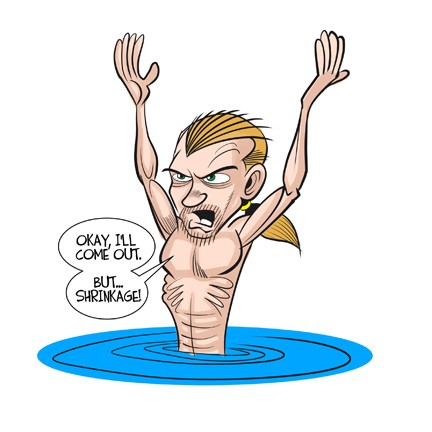 The weather in Oklahoma City on Nov. 3 was pretty nice for a fall day.

According to KFOR, the arrest began around 1 a.m. when an officer tried to pull over a car being driven erratically with its bright headlights near SW 53rd Street and S. McKinley Avenue.

Police said the driver would not pull over and made repeated U-turns. A woman jumped out of the vehicle at SW 62nd Street and S. Klein Avenue and a man exited at SW 46th Street and S. Blackwelder Avenue, but the driver kept going until he reached Lightning Creek, OKCFox.com reported.

“He went underneath the bridge and, at some point, actually took off all of his clothes,” police officer Megan Morgan told KFOR.

Police said Sullivan jumped in the creek, stayed there for nearly an hour and was finally dragged out by four officers. He was arrested on complaints of attempting to elude police, driving without a state driver’s license, speeding, failing to stop at a stop sign and driving with glaring lights.