Chicken-Fried News: We need to talk about Kevin. Again. 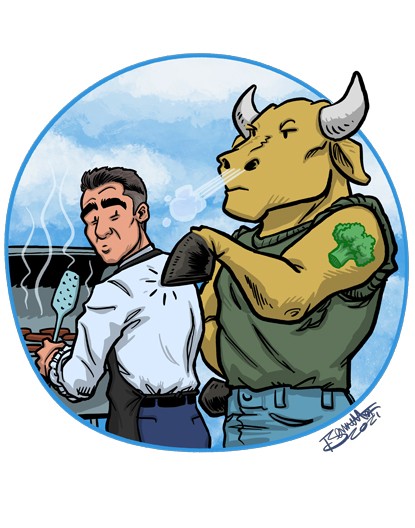 This month, People for the Ethical Treatment of Animals unveiled a southeast Oklahoma City billboard that welcomes travelers to Oklahoma, “home of meathead Gov. Kevin Stitt.”

Our faithful governor, never one to be the bigger man, took the bait and hosted a barbecue near its base, because as we all know, in post-morality Republicanism, owning the libs is the greatest virtue.

While the incident was prompted by Stitt’s declaration of “meat all week” in March, Stitt could have used the opportunity to instead showcase Oklahoma’s wide plant-based agricultural endeavors, but of course that wouldn’t be enough red meat for its base.

The Oklahoman reported that PETA president Ingrid Newkirk retorted that Stitt “must be in agony from all the bowing and scraping he has to do to keep his meat-industry backers happy,” which is unfair. He will grovel at the feet of anyone with money.

However, the burning question on our mind here at Chicken Fried News is whether Stitt enjoyed his burger with a side of French fries. The bigguns. Mmhmm.

But it’s not just the entrees that are being thrust into his food fight.

“Chick-fil-A has a sauce shortage. And you want to know why? Because of Joe Biden’s radical liberal policies,” according to a Stitt re-election campaign press release.

If you buy that, I’ve got a milk bull for sale.

In fact, a press release this spring from Chick-fil-A itself provides an Occam’s Razor fresh off the whetstone.

Posted March 18: “Big news for sauce enthusiasts – bottles of our signature Chick-fil-A and Polynesian Sauces will soon be available for purchase at retailers nationwide!”

Can you guess which state was among the first to offer it by the pound?