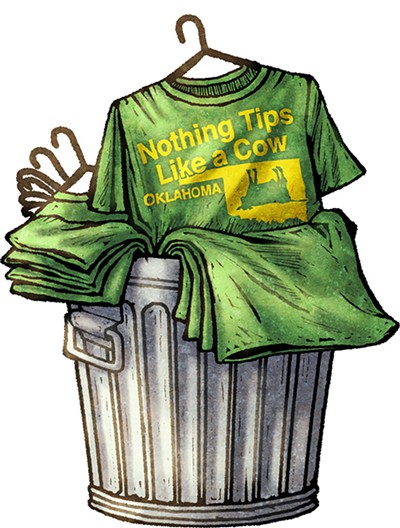 Oklahoma City mayor David Holt completed a “personal mission” and made national news last month when he convinced Will Rogers World Airport to stop selling shirts reading, “Nothing Tips Like a Cow.” In a pair of celebratory tweets dated Feb. 21 (you’ll have to scroll past a bunch of junk about street repair and something called MAPS 4 to read them), Holt wrote, “For the last decade or so, our redesigned OKC airport has made a beautiful first impression on visitors, with one notable exception: the awful cow-tipping T-shirts that bear no relation to actual life in OKC. … I am pleased to report that the great team [at Will Rogers Airport] worked with me the last few months to sell out of the t-shirts & it was just reported to me they are officially gone forever. Efforts will continue to sell unique products that reflect the things that truly make OKC special.”

Sure, cattle across the city can rest a little easier now, but what about Oklahoma’s rich, fake history of shoving over sleeping cows? The Associated Press story about Holt’s quest calls cow-tipping “a largely debunked legend,” but whenever we have out-of-state visitors, we like to deflect questions about our absurdly high incarceration rates by telling them that our official state beverage is fresh milk squeezed from a recently inverted udder. We even made up a fake Rodgers and Hammerstein song about pre-statehood settlers racing to get to Oklahoma sooner while some cows still remain upright called “Goin’ Hooves Up.” Thanks for spoiling the joke, Mr. Mayor.