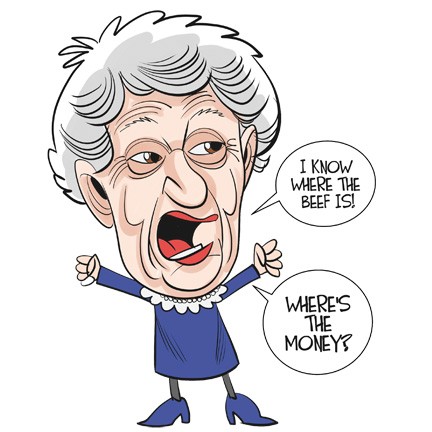 Remember Peller? In the 1980s fast-food commercials, Peller portrayed an old lady demanding more meat and a Wendy’s hamburger. The feisty senior bleated, “Where’s the beef?!” and launched a nationwide pop culture catchphrase that morphed into the existential question of an entire generation.

She died in 1987 (rest her soul), but if Peller was to stand today in front of Oklahoma Beef Council’s counter, we’re confident she would ask, “Where’s the money?!”

After all, the state board collects dollars — lots of them. Not from Wendy’s customers, obviously, but from farmers and ranchers. Under the 1985 Farm Bill, each time a person sells a cow, a $1-a-head fee is sent to the Oklahoma Beef Council under the Beef Checkoff program, which funds marketing and research for the cattle industry. Half stays with the council and half goes to the federal Cattlemen’s Beef Board. (The group is responsible for the “Beef. It’s What’s For Dinner” commercials. Isn’t beef marketing the best?)

This fall, a federal civil lawsuit filed against a former council employee alleged Oklahoma Beef Council’s coffers were short. The lawsuit seeks to recover the funds from former accounting and compliance manager Melissa Morton, who allegedly embezzled the cash, according to StateImpact Oklahoma.

We at Chicken-Fried News have written a time or two about embezzlement cases, but we are scratching our heads about this one. Through joint reporting, StateImpact and Harvest Public Media learned the feds are now investigating a council employee’s alleged of embezzlement of $2.6 million.

According to StateImpact, Oklahoma Beef Council discovered the embezzlement just six months ago, but it might have started with forged checks as early as 2009. The forged checks continued. In fact, five years later, the compliance manager allegedly embezzled more than $315,000, which is close to 9 percent of the organization’s annual revenue, StateImpact reported.

We sure hope the U.S. attorney’s office in Oklahoma City gets to the bottom of this. If guilty, we are either dealing with a very bold and daring thief or a large-scale conspiracy driven by opponents of the Beef Checkoff program.

Unlike real life (well, sort of), in which Peller found the beef in that 1985 commercial, we’re not as confident she would be handed a big pile of that missing dough.