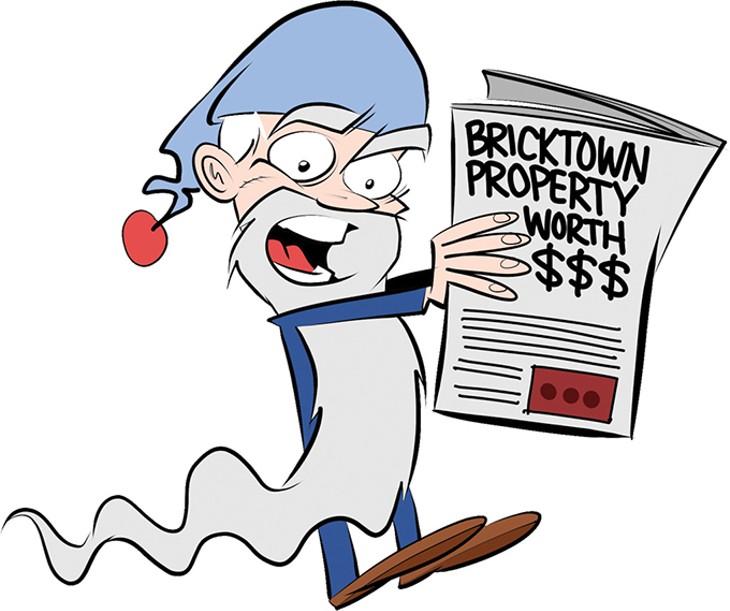 Earlier this month, Bricktown began losing bricks as crews started carefully removing them from the six stories of bricked-up windows at 101 E. Sheridan in Bricktown. Historically, the building was the home of Oklahoma Furniture Manufacturing Company, but it is most recognizable to Bricktown pedestrians as the more recent home of The Spaghetti Warehouse Restaurant, which closed in 2016 after 28 years of serving pasta to out-of-towners unfamiliar with OKC’s food scene.

According to NewsOK, new owners Sam Coury and Danny Wright bought the building in 2017 for $3.8 million and, after what Chicken-Fried News assumes was a comprehensive and costly carbohydrate abatement, tested one opening to see if it was possible to unbrick a window without unbricking the entire building. The experiment in January worked, and now the building is becoming less and less defenestration-proof by the day.

This is a damn fine building that will be a great place to live once the full residential conversion takes place, and the prime location will have great views of the city.

But what were they thinking by bricking this thing up in the first place? CFN thinks this was taking the Bricktown concept to an illogical conclusion.

Actually, the windows were bricked up about 50 years ago and the building was painted white around the time the old warehouse district was falling into steep decline. Even the street it was located on, Grand Boulevard, was renamed Sheridan Avenue in the late 1960s because Oklahoma City Council didn’t think it was so grand anymore. Chances are, if you were looking out of one of those windows in 1964 or so, you didn’t like what you saw.

CFN wonders what it would feel like to have pulled a Rip Van Winkle and fallen asleep while they were bricking up the windows. Besides being old, pale as a Carlsbad Caverns insect and reeking of three decades of marinara sauce, you’d wake from your slumber to discover that Skid Row was now some of the most valuable property in Oklahoma City.

So cheers to the newly ventilated building. CFN calls dibs on any vaults filled with sweet, sweet Eisenhower-era bills.