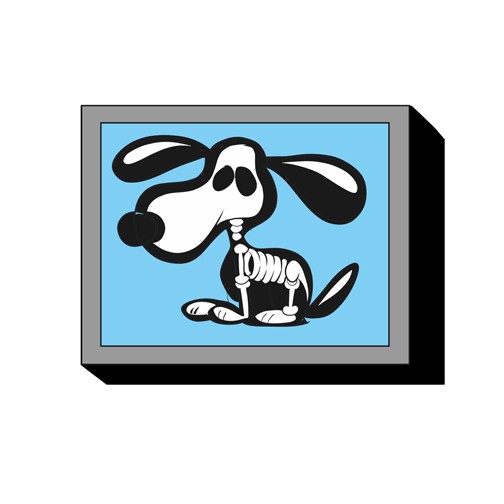 It looks like a mini dinosaur, maybe a Velociraptor, being scanned with high-tech radar from the safe confines of a concrete box. No! It definitely looks like the dog monster from Ghostbusters. Well, to everyone’s surprise, it’s neither, and the Oklahoma County sheriff wants to make something clear to courthouse visitors.

“*DO NOT PUT YOUR ANIMALS THROUGH THE X-RAY MACHINE AT THE OKLAHOMA COUNTY COURTHOUSE*,” reads the caption accompanying the photo on sheriff’s office Facebook page.

KOCO.com recently reported that deputies didn’t notice the tiny pet dog going through the machine until it was too late. Fluffy (name changed to protect the innocent) probably feared for his life as his carrier was hoisted onto the conveyor belt for a ride along with cell phones, purses and car keys.

Thankfully, KOCO.com reported the x-ray machine emits radiation too low to cause any harm to cats or dogs.

Again, *DO NOT PUT YOUR ANIMALS THROUGH THE X-RAY MACHINE AT THE OKLAHOMA COUNTY COURTHOUSE.*

The post explained that animals are often allowed in the courthouse because they might be involved in cases or serve as therapy dogs. Law enforcement asked that people please tell deputies about pets instead of putting them through the x-ray machine.

Follow the Oklahoma County Sheriff’s Office Facebook page for more common-sense tips like don’t drink and drive, don’t run over a police officer’s foot and don’t stop at the nearby convenience store after escaping jail.