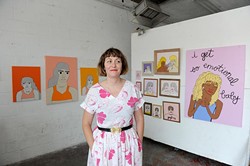 So many times, artists try to tackle life’s heavy themes, exploring the innermost recesses of our collective soul through their brooding, introspective work.

Local artist Melissa Jacobs gives us a little relief from all that with her show What’s A Girl Supposed To Do, now at Norman’s Dope Chapel, 115 S. Crawford Ave. The show debuted July 10 as part of Norman’s monthly second Friday art walk.

Jacobs’ straightforward, emotive style could almost be called childlike, and to hear her describe her latest exhibit, that’s exactly where much of her inspiration comes from.

“A lot of what I was thinking when I really make any of my stuff is about what I would do when I was a little girl to have fun,” said the 35-year-old Ponca City native. “I’d draw, listen to Whitney Houston, Madonna and other pop music from the ’80s. I try to bring that feeling I had when I was little into my work.”

Jacobs has shown her art around the metro for years, gaining attention for her distinctive style, which primarily features female subjects drawn in clean, almost rudimentary lines and filled with solid, vibrant colors. Viewers shouldn’t confuse simple with simplistic, however.

Jacobs’ work is emotionally striking, unapologetic and powerful. Her subjects stare back at the viewer confidently, almost brazenly. The thick, black outlines filled with solid, primary colors have become her trademark, and Jacobs said What’s A Girl Supposed To Do continues to explore women’s themes.

“I like to create portraits of women that are based a lot more in emotional feelings and less of what I actually see,” Jacobs said of her distinctive style and subject matter. “It’s more expressive, definitely, but it’s turned into real, personal style. And the idea of what I felt as a little girl and what I feel now, that’s always in my work. Women’s identity is almost always a theme in my art, so I’m just bringing that to this show.”

Jacobs said What’s A Girl Supposed To Do is a mixture of old and new pieces.

“I’ve been working really hard,” said Jacobs. “There are a few new pieces in this show, but there’s some from the past, too. After having a show last month (at Tall Hill Creative), it’s a lot to have shows back-to-back in a month, but I will have some new pieces to show.”

What’s A Girl Supposed To Do will be on display until Friday and can be seen by appointment.

What’s a Girl Supposed To Do