Mariana Llanos woke up at 5 a.m. and quickly freshened up before logging into Skype to speak to grade-school students in Nigeria, which is six hours later than local time.

On this day, Llanos also had a later visit scheduled with an Illinois school.

She reads Tristan Wolf the same way to both classrooms. She said the similarities in their reactions are striking.

“They both felt the same about the story, and they laughed at the same spots,” she said.

Though separated by more than 6,000 miles and the entire Atlantic Ocean, their relationship to the story was identical. Suddenly, the world felt smaller. She realized that everywhere, children are just that — children.

Llanos, a mother of three young children, moved with her husband and family to Oklahoma City from Lima, Peru’s largest city, about 15 years ago after he found a new job in the United States. Writing has always been one of her passions, but it remained a hobby until 2013, when she self-published her first book, Tristan Wolf.

Poesía Alada, a collection of children’s poems paired with works by several illustrators, is one of the first projects Llanos wrote in Spanish, her native tongue. It was published in April.

She wrote her first books in English for her children, who speak Spanish, but not as their first language. Now that they are a little older, she decided to do something different.

“I wanted them to see that I am proud to speak Spanish, too,” she said. 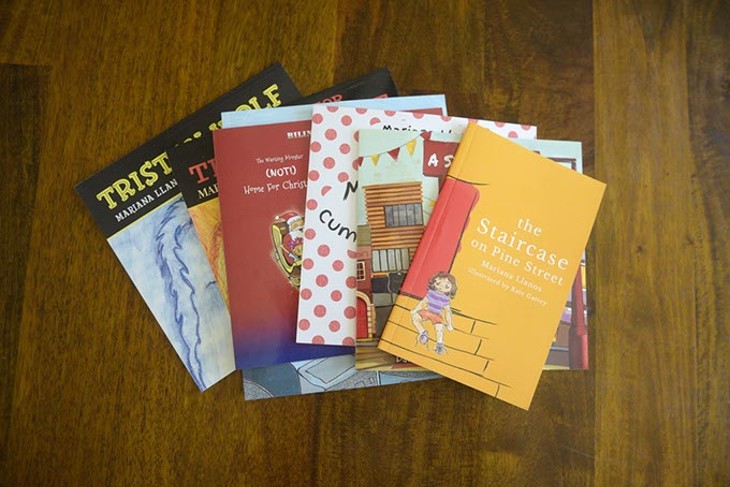 Llanos appreciates what she calls children’s “cultural books” — writings for young audiences that explain and normalize culture — but she does not want to be typecast into that niche. Her stories are informed by her Peruvian upbringing, but also transcend regional cultures.

“I like to think my books are universal — things that could appeal to a child here or a child in China,” she said.

Llanos has visited more than 150 schools, some in person but most via Skype. When visiting students in classrooms, Llanos reinforces what their teachers have taught them, especially about creative writing. She also stresses the importance of reading and not being afraid to make mistakes.

“I think I’m breaking stereotypes,” she said. “Maybe they’re used to hearing this accent at a restaurant or from the cleaning lady, but now they’re hearing it from a person who writes too.”

Above all, Llanos wants all children to realize they can be writers. She is taking submissions for a new anthology of student-written poetry, which she plans to publish in the near future. Each selection will be paired with an illustrator who will help give life to the child’s vision.

“I want to give kids that opportunity to be proud of what they’ve done,” she said. “With writing, it’s something where you have to use it. You write something, and then do you put it in your drawer, or what do you do with it? You use it; it can communicate and touch people’s hearts.”