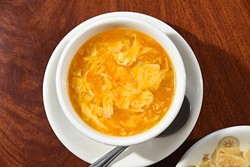 What a strange and exotic delicacy. For a very young me, back when the Earth was new and no one knew the dogs were even out, much less wondering who had done the letting, egg drop soup was the height of luxury.

We didn’t eat out very often, and when we did, it was usually at The Black-eyed Pea or Pepe’s Mexican Restaurant. But for one dinner with extended family, we went to Blue Moon and my eyes were opened to the cuisine of the Far East.

Somewhere along the way, the magic wore off. Too many meals of tough orange chicken and flavorless lo mein. Too many egg rolls that had never known the touch of human hands and packets of soy sauce that just tasted like salt and boredom.

Actual Chinese food has almost nothing to do with American Chinese food. Thank goodness. I don’t care that it’s our bastardized version of another country’s cuisine. Do you think our hotdogs are fresh from Frankfurt? No. But this is what we have. There’s nothing wrong with it.

And that’s why I was delighted by Chong Wah Bistro & Grill, 2345 N. Douglas Blvd., in Midwest City. Its staff prepares American Chinese food like they love it, and I love them for it.

The best example of their prowess is with an oft-maligned, rarely enjoyable dish known as sweet and sour chicken ($8.25 with white or fried rice).

Sweet and sour? Talk about decadent. Most people would settle for one or the other, but not here, not in America.

And Chong Wah takes great care with its rendition. The chicken is tender and wrapped in a crispy, pillowy cloud of fried batter. Sweet and sour sauce is served on the side, so you can apply as little or as much as you like.

It was the best I’ve had quite a while. It was like the people cooking the food wanted diners to enjoy it or something.

Plenty of favorite dishes come as both a lunch special ($6.25 with an egg roll, two crab Rangoon, choice of soup and white or fried rice) or the all-day special ($8.75 with all above plus a side of sweet and sour chicken), and it’s a pretty sweet value either way.

My Szechuan chicken was simple — with bell pepper, bamboo and chicken in a spicy chili vinegar sauce — but delicious. The heat of the dish was never overpowering but was packed full of flavor. It disappeared from my plate with enough speed that it was recently cast as the second lead in the next The Fast and the Furious film.

Ditto for the General chicken, which had pieces of fried bird cooked with garlic and spicy sauce. (It also sounds like a very vague kind of meat: “What cut of the bird do they use?”

You’ve had General Tso’s chicken before and you said it was good, but you were lying. It was tough and greasy. This, however, is clean, fresh and delicious. Chong Wah knows its stuff.

Including, oddly enough, sushi. Yes, I know that Oklahomans have a maddening tendency to lump all Asian foods together, despite nations being hundreds, sometimes thousands of miles apart. But this restaurant does both, and does them well.

Nobody was more surprised than me when my Valentine roll ($11.95) came out looking like a work of art and tasting wonderful. I’m sorry that I ever doubted you, Chong Wah. This mix of fried shrimp, crabmeat, cucumber and avocado topped with spicy crab salad and fresh tuna is a treat for the eyes and tongue, like a Popsicle shaped like Marilyn Monroe.

They also have a ridiculous sushi lunch special, with two rolls for $10 or three for $14. My spicy red snapper roll was simple and fresh. And the Jacky roll had sweet snow crab, tuna and masago. None of it was particularly fancy, but it was done well.

Both specials come with an egg roll, which was fine, and crab Rangoon, which was wonderful. These crispy envelopes laid mostly flat, but had plenty of that sweet cream cheese and crab flavor without too much oil.

The egg drop soup was just as I wanted it to be: bright yellow from yolk with wisps of egg white ribbons swirling around. As an added bonus, they toss in a little diced red pepper, which adds crunch and color more than flavor.

The staff was friendly, fast and accommodating. Sit at a recently emptied table and they’ll rush over to wipe it down. And they won’t judge you if you order the equivalent of three lunches. (I’m speaking from experience here.)

Best of all, they’re doing the classic Americanized Chinese food so many of us grew up eating, and they’re making it right. This is the food you remember, but better than it ever really was.

What works: Great Chinese food classics done with care. What needs work: The fried rice is a bit bland. Tip: Call ahead if you want to get your takeout from the drive-thru.