When shihan Chris Fay leads classes at his Okinawa Karate School, 224 S. Sooner Road in Midwest City, the students face a symbol featuring a clenched fist with black circles over the index and middle fingers. It is the official symbol for Okinawa Karate-Do Goju-Ryu Shorei-Kan, a strict tradition of karate that makes the dojo at 224 S Sooner Road unique to the region; it is a place where the degrees of separation between Okinawa and Oklahoma are shockingly small.

“I can literally say that my instructor was tested by Master Seikichi Toguchi, who was taught by Chojun Miyagi, the founder of Gojo-Ryu karate,” Fay said.

Fay’s instructor was the founder of Okinawa Karate School, Tom Haggerty, a former traveling salesman who, after a close call with some hard-edged criminals on the road, decided that some self-defense skills could come in handy. In 1968, Haggerty sought the services of Ichiro Takahata, who studied under Toguchi in Okinawa and came to the U.S. in the early 1960s to teach Okinawa Karate-Do Goju-Ryu Shorei-Kan.

In 1972, 40-year-old Haggerty earned his black belt after being tested by Toguchi, and the following spring, he opened a small dojo in Midwest City. As one of the few dojos in Oklahoma City, Haggerty soon found a sizeable clientele, building up to over 120 students within two years and moving to the dojo’s current location by the mid-1970s.

Around that same time, Takahata was closing his own dojo to open Samurai Saki House, the legendary hard rock venue on N. May Ave. Fay said he sold his weights to Haggerty, who then expanded his operation, which became the preferred gym for bodybuilding contestants and provided the earliest retail location for Century Martial Arts, the Midwest City-based martial arts gear manufacturing giant.

Fay’s experience at Okinawa Karate School began when he was 14 years old.

Fay took to Haggerty’s teachings quickly, earning his brown belt in nine months, and within two years, he mastered the form.

“I got my black belt in ’78, and I’ve been the main instructor here since I was 16,” he said. “Tom took me under his wing, and I’ve made sure — I still make sure — that I do everything to the T the way Tom taught me.”

Since that time, Fay has served as an instructor at the dojo, reverting to part-time occasionally in the 1980s when he was a guitarist in hard rock bands. The business thrived until the oil bust of the mid-1980s, which siphoned off much of the dojo’s clientele, forcing Haggerty to downscale his operation by closing the weight gym and the kickboxing ring. In 1994, Haggerty’s wife Ruthie Jo had a stroke, which dealt another blow to the operation.

Still, Haggerty persevered with his vision with Fay at this side, and since Haggerty’s death at age 82 in 2014, Fay has maintained the traditions. Each class is 90 minutes long, beginning with sit-ups, push-ups and basic moves. As it has for years, Chris Fay’s Okinawa Karate School offers prospective students of all ages and skill levels a free week at the dojo, where they will learn what Fay considers the purest form of karate. While he professes admiration for mixed martial arts (MMA) fighters, he said that the study of a precise art such as Okinawa Karate-Do Goju-Ryu Shorei-Kan provides a unique level of discipline.

“Some people say, ‘Oh, that traditional karate isn’t any good in a street fight,’” Fay said. “But when you come in and repetitively practice and concentrate and do these moves, they become reflex reactions. That is the martial art.” 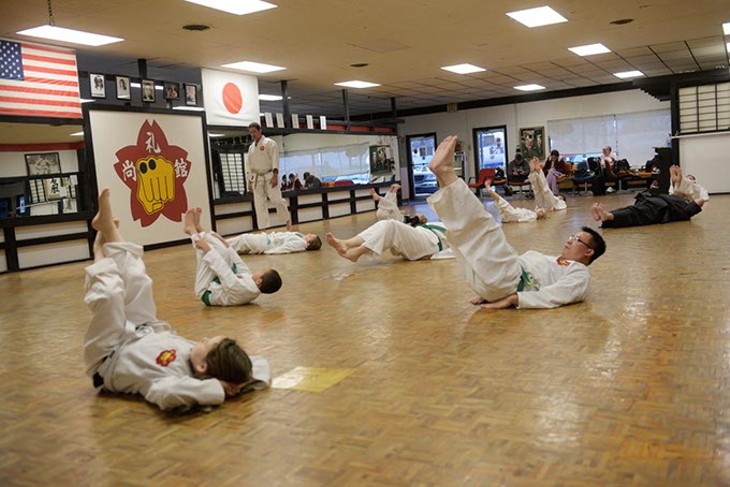