“Even if I don’t rap, even if there’s other rappers, I want to be able to bring people in and stuff like that — even if we just have a party,” he said. 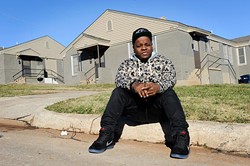 On a recent stroll through his old neighborhood near the intersection of Martin Luther King Avenue, the independent rapper spots the duplex where his mom took him and his family for shelter when they had no place else to go. He sees the driveway where Uncle Jerry was shot and killed. And he contemplates people — people like him.

Jabee, who recently returned from a European tour with Sweden’s Looptroop Rockers, hosts Gift Raps 2, the sequel to last year’s free charity concert that raised a truckload of food and goods for local families much like his own.

With a food or winter clothing donation, those wishing to attend this year’s event can see Jabee, Josh Salle, Beetyman, HuckWheat, Trash TV, DJ Keilo and DJ Reaper 9 p.m. Dec. 18 at 51st Street Speakeasy. The collected goods will be donated to City Care, a local nonprofit that helps tutor and mentor inner-city youth and feed and shelter low-income families and the homeless.

When Jabee was growing up, he saw rappers on television return to their old ’hoods to pass out 1,000 free turkeys. But no rap moguls ever came to the east side of Oklahoma City, and TV cameras only came when something bad happened.

Even with his recent success, he said he’s far from being able to feed 1,000 families himself, much less afford his own turkey. What he does have is a platform to reach those who can help.

“That’s what this is about: just trying to pay back what I owe to people who have been there for me,” he said. “Not only that, but [it’s about] where I grew up and how I grew up. There are people I know who didn’t make it, that are locked up or dead or still in the same types of situations.”

Jabee’s mother kept their small, two-bedroom house so tidy, his friends thought they were the rich ones on the block. Rich in family, maybe.

Without any place to call home, a 12- or 13-year-old Jabee and his family were forced to take shelter at a place that belonged to the daughter of one of his mom’s friends. They had good times and bad, but he remembered that some of the holidays were their hardest.

He remembered one year when their car was broken into and no one got anything for Christmas.

Whoever stole their stuff took more than material goods: They took something from inside of Jabee. He didn’t like going to school anymore. He didn’t like seeing his mom work so hard. He was frustrated.

The next winter, he was forced into a maturity beyond his preteen years after watching his mother go through a particularly stressful period.

“I just remember that Christmas, telling my mom, ‘I don’t really want anything,’” he said.

But that was not quite the truth. Jabee had his eyes on a black Tommy Hilfiger beanie like so many other youth sported back in the ’90s.

His mother worked multiple jobs to make sure her children had a good, if modest, Yuletide. When he woke up that holiday morning, a new, black beanie waited for him. It was a knockoff, but he didn’t care.

Outside of the hat, Jabee didn’t receive much else: socks, underwear, a plastic dartboard he felt he might have been a little too old for. Still, he was thankful.

“I enjoyed it because I knew my mom had worked her butt off for that,” he said.

While many local families eagerly count down each day to the holiday, Jabee said there are some in the city who would rather skip it.

“Christmas is a hard time because people start stealing, the prices get higher for stuff, it’s colder outside,” he said. “For some people, Christmas is a really happy time, but for a lot of people that I know or where I come from, it’s like, ‘Dang. It’s already Christmas?’”

Growing up, his family received free Thanksgiving baskets from the Jesus House or picked up a Christmas turkey from a local church. There were always churches, preachers, charities trying to lift up the people in the neighborhood, he said, but there was no one he could relate to that was trying to bring something positive to the community.

He had no Jabee.

Though once homeless, at no time in his childhood did he think he had it bad. It was all he knew. Each family he was around was either just like his or worse.

Today, the artist feels a strong need to tell his story through his music and help the people who can best relate to its message. He hopes his Gift Raps event becomes an annual sign of hope for those who grew up like he did.

“Even if I don’t rap, even if there’s other rappers, I want to be able to bring people in and stuff like that — even if we just have a party,” he said. “Even if I’m not even here, I hope it’s something that we still do because it’s a way for me to continue to give back every year.”

Print headline: Past, presents, A tough upbringing motivates rapper Jabee to give back to his neighborhood.