Chuggington rolls into OKC for one performance only 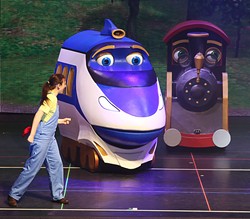 All aboard! If you don’t know who or what Chuggington is, you can bet your kids probably do. No, he and his friend Brewster are not bartenders, nor are they on the summer cocktail list at Republic Gastro Pub. Chuggington is a town, and Brewster lives there with his friends.

The live show is based on a BBC traintastic series aired on Disney Junior in which valuable life lessons are taught by a ragtag bunch of beloved animated trains with wildly different personalities. Wilson is responsible and heroic. Koko is fearless and electric (literally). Hanzo is a super speedy bullet train, and Irving is a perfectionist.

These characters and more make up the trainees, and together, they learn things like cooperation, tolerance and perseverance. Now, the citizens of Chuggington will be in Oklahoma City. Live.

“This is a great first introduction to live theater for children. It’s got singing, dancing, and the audience is invited to sing along. And what child doesn’t love trains, especially everyone’s favorites ... performing on stage?” said Libby First, marketing director at Celebrity Attractions.

For those of you who speak Chuggington-ese, the trainees have started their advanced training and are anxious to practice and perfect their newly gained skills, which will make them braver, faster and stronger. When Koko finds herself in trouble at Rocky Ridge Mine, her friends have to help her. It’s a nail-biter! Can the trainees use their new skills to save their friend? Will Wilson earn the title of Chug Patrol hero by rescuing Koko? Make tracks to Civic Center Music Hall on Sunday and find out for yourselves.

Chuggington airs in more than 178 countries and is translated into 36 different languages. It first aired on Disney Junior (then Playhouse Disney) in 2010. In the United States, the TV show is seen 22 times per week across Disney Junior and Disney channels, with an estimated 2 million viewers every week.

The design of the train characters is inspired by real engines from all over the world. Chuggington is an abbreviation of Chugging Town. According to a fact sheet about the TV series, the original working title of the TV show was Chuggington Tracks and 80 children auditioned for the opportunity to become the voices of the three main characters: Wilson, Brewster and Koko. Sarah Ball, who directs the TV show, is the one who shouts, “Honk your horns!” in the intro of the Chuggington theme song.

The North American premiere tour of Chuggington Live! The Great Rescue Adventure rolls into Civic Center Music Hall for one special performance 2 p.m. Sunday.  This live-action, musical children’s show gives young fans and their families the opportunity to experience the adventures of the Chuggington trainees.

Tickets are now on sale and may be purchased at 800-869-1451, at the Civic Center box office or online at celebrityattractions.com.

Print headline: Traintastic time, Chuggington Live! promises to be off the rails.