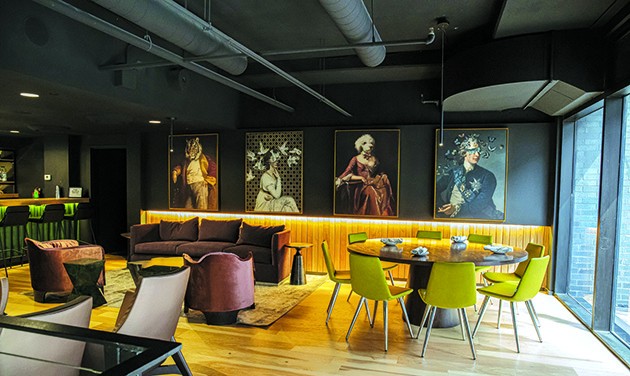 One print of art on the second floor of the combination lounge and dining space of Bar Cicchetti — the former Urban Johnnie location in Deep Deuce — depicts a Victorian-era lord in fancy clothes, but it has a tiger for a head. The print next to it depicts a high-class lady with a dog for a head.

“I like [the art] because it’s weird; it’s classic with a twist. It’s refined but fun and silly,” said chef Jonathon Stranger, who partnered with Top Chef veteran Fabio Viviani to create Bar Cicchetti, their second restaurant together after last year’s Osteria.

Refined but fun and silly might also be an apt description for Bar Cicchetti, which takes its name from the Venetian style of eating a meal comprised of small snacks and side dishes.

The menu is drink-forward with cocktails and designed around small plates, flatbread pizzas, sandwiches and an all-day menu of entrees with smaller lunch-sized portions on the same page as larger dinner portions that blend flavors from across the Mediterranean with U.S. and Oklahoma products.

The concept started not long after Stranger and Viviani opened Osteria last November. Stranger said he was immediately attracted to the space at 121 NE Second St., on which he said they did a strategic planning analysis to determine if customers thought the former space delivered good quality drinks and was a good place to watch a sporting event.

“There’s not really tons of places to watch a game here in Oklahoma City,” Stranger said. “So we wanted to make sure we get that, but not with 38 televisions.”

The screen inundation has been replaced with one large 300-inch screen that disappears behind a curtain when not in use. OLED screens behind the bars display a rotation of photos and art but can be switched to television at a customer’s request.

“It was a collective effort to get it right,” Stranger said. “Doing this kind of setup of seating is not easy. I didn’t want everything to be leather, so finding materials that could hold up to restaurant use so we had to test everything and make sure you can always access food and drink. At every couch, there is always an end table, but also not making it feel like a nightclub isn’t also very easy either.”

Stranger and Viviani recruited chef Jesse Erwell from Miami to run the day-to-day operation of the kitchen, which is heavily influenced by Italian, Spanish, French and North African flavors.

“Cicchetti-style means that there really isn’t coursing, but if you want to do coursing, we can,” Viviani, a native of Florence, Italy, said. “This is more like, ‘Let’s grab a bunch of drinks, share some food, eat a few bites of this and that.’ We bring that vibe with a communal table and the not-quite-defined separation between the dining and the lounging.”

“People ask me all the time, ‘Why Italian and Spanish?’ It’s the same ocean,” Viviani said. “I grew up in Italy eating croquettes and bocadillos. … The Spanish peninsula has a lot to offer, whether it is the Portugal end of Spain or the northern part of France. We have cumin, which is non-Spanish. It’s actually North African. This is an Italian concept at heart that is owned and operated by an Italian guy and American guy that are known to do world food without being too worried about what is respecting the flock. Good food is good food.”

“With the bouillabaisse, we added a touch of cream,” Viviani said. “In France, they’ll kill you if you put cream in the bouillabaisse, and we added saffron from the northern region of Italy with the cream like we’re doing a Moroccan seafood stew. We’re having fun; we really are.”

Akaushi is a specific breed of Japanese cattle that often gets lumped into Wagyu, but the Wagyu title actually refers to several breeds of cattle, according to the American Akaushi Association. The Nishyobi Akaushi comes from a farm in Arcadia.

“It’s the only Akaushi in the U.S. that’s been fed grass its entire life and it lives on pasture,” Stranger said. “Doing that means it takes forever to raise the cattle. Normally you slaughter in about 14 months, but these are 30 months.”

Viviani said items like fresh seafood shipped in from Santa Barbara, truffles and caviar on the menu speaks to the advantages of operating in Oklahoma compared to markets that require $10 million to open a high-end restaurant.

“The fact we can sell stuff at a good price with a good margin allows us to have fun with ingredients,” he said. “It translates for us to have good business and for you to have a good time. You can’t do that in places where you’re charged a million dollars in rent, and it means you have to overcharge for a not-so-good product.”

Together, Viviani said he and Stranger employ more than 3,000 people across their portfolio of restaurants, and their partnership is growing. They have a Tulsa location for Osteria planned for spring 2020 and another project coming down the pike for Oklahoma City.

“We’re keeping it hush right now, but it is big. I can tell you that,” Stranger said.