“It opens up the doors, especially to kids, which I think is amazing,” he said. “They’re the future. I was once that kid, too.” 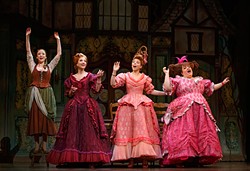 For at least one night, the three Oklahoma City University (OCU) graduates in the touring Broadway production of Cinderella will have their own small cheering section when their show comes to town.

Ben Lanham, a Cincinnati native who has had a role in Cinderella’s ensemble cast since the tour began 18 months ago, said he will be onstage March 27, when OCU dance and theater faculty are in the crowd to see him and the two other OCU graduates in the cast.

Lanham said he first auditioned for the show as a replacement when it was still on Broadway. He did not end up getting the gig but was able to go on tour. Lanham is one of the few original members of the tour cast still with that production. They’ve done more than 500 shows since he began.

In Cinderella, Lanham is a swing, meaning he understudies the entire ensemble cast. Its men’s ensemble cast includes seven people.

When one of the members of that ensemble cast goes on to the lead cast or is sick or injured, Lanham fills in for him.

“I explain it to people as I’m like the insurance of the company,” he said. “I’m there to fill the holes when needed.”

This version of Cinderella was updated by playwright Douglas Carter Beane from the Rodgers and Hammerstein original to modernize the story and make it more relevant. Lanham said he loves the story’s message and added that it is not “just your Disneyfied Cinderella.”

“It’s really about Cinderella empowering herself as a young girl and bringing kindness to a kingdom that is full of ridicule and animosity,” he said.

Before Cinderella, Lanham performed West Side Story in Europe for a year. The cast left work at work, but constantly going through gang and violence themes no doubt affected the cast’s mood. This time around, Lanham said it’s good to be involved in a production with a more positive energy.

“It’s very lighthearted and fun,” he said. “It’s something I look forward to doing every night.”

Though this is not the Disney version of Cinderella’s story, Lanham said he welcomes the association with the classic animated film. Being in a big-name production always brings out different kinds of theatergoers. He said he loves looking out into the audience and seeing the little girls — and sometimes grown women — in their Cinderella dresses.

“It opens up the doors, especially to kids, which I think is amazing,” he said. “They’re the future. I was once that kid, too.”