If any musician was destined for a Cirque du Soleil tribute, it’s Michael Jackson. 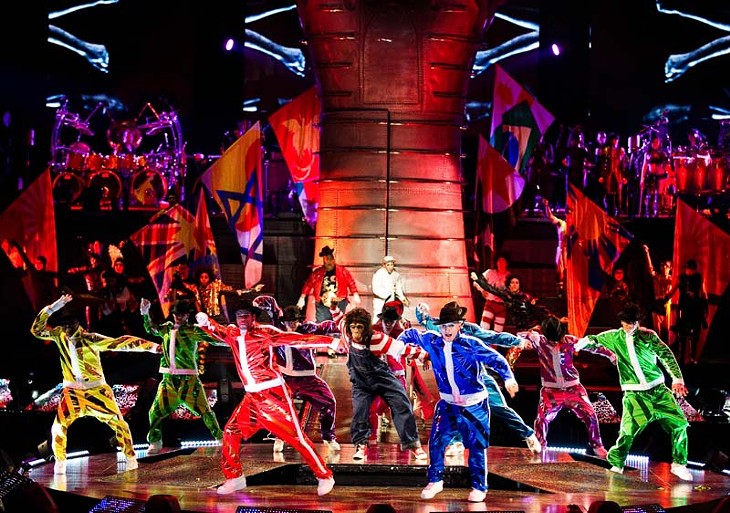 If any musician was destined for a Cirque du Soleil tribute, it’s Michael Jackson. Even from the very beginning — his days fronting the inimitable Jackson 5 — Jackson had a stage presence, an aura, that was perfect for such a grandiose production.

As Jackson’s solo act and concerts evolved from the late ’70s into the ’80s and ’90s, so too did his theatrics, his shows becoming more of a spectacle with each passing tour. Backup dancers, forward-thinking choreography, pyrotechnics, extravagant set designs — you’d almost think Jackson was borrowing from Cirque du Soleil, whose performance art became a Las Vegas staple around the time of Jackson’s ascension to the pop music throne.

Unsurprisingly, the late, great King of Pop was quite the Cirque du Soleil fan. He had seen several of its touring shows when they came through California, even compelling him to visit the company’s headquarters in Montreal. After his death in the summer of 2009, it was this mutual respect and admiration for each other’s art that spawned the Michael Jackson The Immortal World Tour, which stops by the Chesapeake Energy Arena July 22-23.

“They have a lot in common,” said Laura Silverman, spokesperson of the tour. “They both are always trying to push the boundaries and create something new and something the world hasn’t seen yet. Whether that’s a short film/music video or these human acrobatic acts, they’ve both always been pushing the boundaries to create jaw-dropping effects. When you put those ideas together, it creates a very grandiose spectacle of a show.”

The Immortal tour, however, is somewhat of a departure from your average high-flying, acrobatics-based Cirque du Soleil performance. With a live band — which features four members of Jackson’s touring act — and stylized choreography, the show strives to embody the full Michael Jackson experience more than anything else.

“You’re getting a very different type of Cirque du Soleil show,” Silverman said. “It’s designed much more like a rock concert. The music, the band, this incredible 11-piece band with four band members who previously played with Michael Jackson — they are really the focus of the show.”

The music, curated by Musical Designer Kevin Antunes and Music Director Greg Phillinganes, runs the gamut of Jackson’s diverse catalog, featuring almost 35 songs from Jackson 5 to his final days, even featuring some deeper cuts that were of utmost importance to Jackson himself.

As such, MJ aficionados will appreciate the breadth of its soundtrack, and the members of the band who toured with Jackson are crucial in recreating these sounds.

“It’s really great for them to be able to continue to carry on his music,” Silverman said. “And then it’s great for everyone else who’s a part of the show to have them share what it was like to work with him and be there every day.”

“With any of the Cirque du Soleil shows, you’re guaranteed to get a very high-energy, colorful, jaw-dropping experience, witnessing people doing these incredible things with their bodies that you didn’t know were possible,” Silverman said.

Five years after his death, the impact that Michael Jackson had on pop culture is as strong as it ever was. The Immortal tour is just one way of keeping his legacy alive, a highly entertaining aural and visual spectacle of which Jackson himself would be proud.

“He’s the King of Pop,” Silverman said. “His music, dance and lyrics influenced the world when he was alive and continue to do so. So I think it was a great opportunity for Cirque du Soleil and the estate to carry on his legacy and his messages and his music to more generations.”