Oklahoma’s average Municipal Equality Index ranking is 32, about half of the national average. 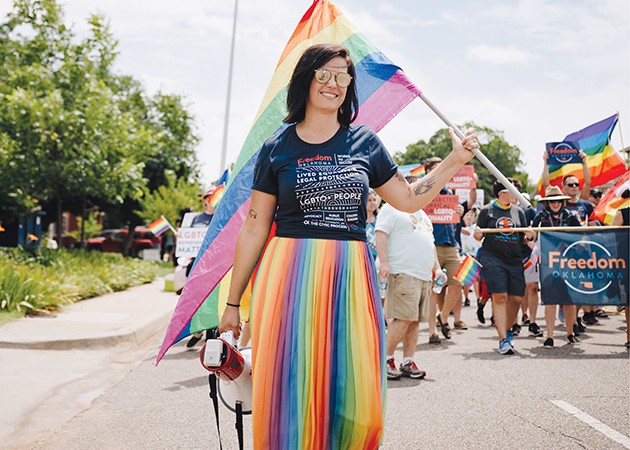 Human Rights Campaign (HRC) annually ranks cities across the country in various categories from 0 to 100 through its Municipal Equality Index. Norman more than doubled its ranking from 41 in 2018 to 92 this year. One of the main reasons is that the city recently updated its nondiscrimination ordinance to include protections for sexual orientation and gender identity when it comes to housing, employment and public accommodations.

“What The City of Norman has done is expand comprehensive nondiscrimination protections, the sort that we know we need to see across the state and across this nation,” said Allie Shinn, Freedom Oklahoma executive director. “If a city in Oklahoma is wondering what they can do to really put their money where their mouth is and protect LGBTQ residents of the city, the gold standard would be nondiscrimination protections.

“What Norman, Oklahoma, has done is shown us what’s possible in a conservative state like Oklahoma. These are human rights issues, not partisan issues, and The City of Norman has demonstrated that when we display respect in our laws and in our actions for all residents of the city, we really move forward. We’re so excited for them to put this roadmap out there for other cities in Oklahoma to follow suit.”

Oklahoma City’s MEI score also improved, from 40 in 2018 to 44 this year partly due to the fact that Ward 2 elected councilman James Cooper, the city’s first openly gay city councilor.

“They want to learn about hate crimes, about how inclusive the community is
and if that score really reflects the representation here.”
—Jose Vega tweet this

Of the eight Oklahoma cities on the index, only Norman and Tulsa (62) scored higher than the national average of 60.

Jose Vega, deputy director of Tulsa-based Oklahomans for Equality, said Norman is showing the state what diversity and inclusion is all about. Despite scoring higher than the national average, Tulsa is the only city in Oklahoma that lost points from 2018 to 2019. Vega said he was disappointed because the city wasn’t awarded points for various things like having an LGBTQ+ liaison on the police department.

“I want to help spearhead [reporting next year] to make sure that every point is counted,” he said. “There was several points missing like openly LGBTQ+ city officials. We have two openly LGBTQ individuals, one city councilor who identifies as queer and one councilor who identifies as bisexual. Those points were not counted. … There was even another one, where that should’ve given us maybe 75 or 80 [overall points]. We have a meeting with City Hall in December to talk about how to move forward next year.”

It’s crucial to make sure each city’s score is accurate because people pay attention to the rankings, Vega said. Dennis R. Neill Equality Center, owned and operated by Oklahomans for Equality, receives calls from LGBTQ+ people who are potentially moving to Tulsa.

“LGBTQ individuals look at those scores before moving to the city,” he said. “We have received numerous calls of, ‘Hi. I am moving to this new company in Tulsa, Oklahoma, and I just researched your score.’ Based on the score, they want to learn about hate crimes, about how inclusive the community is and if that score really reflects the representation here. We really need to improve that score.”

Moore was awarded 0 points, and four other cities scored between 12 and 19, making the state’s average 32 – about half the national average.

“There’s a huge discrepancy between Norman, Oklahoma … and smaller towns across Oklahoma that are well below average or even as low as 0,” Shinn said. “What we know is that this is also a demonstration of how LGBTQ people live throughout Oklahoma. We have a radically different experience if you are a person living in Oklahoma City, in the city center, or if you’re a person living in rural Oklahoma. This also has so much to do with gender identity, with race, and when we think about how all of these different things intersect … these are steps forward that we have to take with a racial justice lens, with a lens to gender identity throughout the state of Oklahoma and throughout our nation.”

Part of Vega’s role within Oklahomans for Equality is overseeing the various chapters his organization has across the state. He intentionally reaches out to more remote places to help establish new chapters or empower LGBTQ+ communities in other ways.

“We know that in these remote, rural areas, a lot of LGBTQ individuals feel alone. Youth are being kicked out of their homes with nowhere to go. There’s no safe places,” he said. “I’m working on rural areas to improve their lives. We’re very blessed that we live in a large city in the state of Oklahoma, that we sometimes forget the privileges that we have, the security. These rural areas don’t have that.”

While there has been progress for LGBTQ+ rights, both Shinn and Vega said there’s still a lot of work to do.

“The movement for LGBTQ+ equality has had a real problem with not including our trans siblings, not making sure that we’re inclusive of racial minorities, of our Two Spirit communities, and that’s something that we’re really seeing changed in the nationwide movement and right here in Oklahoma,” Shinn said. “For LGBTQ equality today, we do not consider it equality if it only protects lesbian, gay and bisexual people. If we are not protecting our full community, then we don’t consider that a step forward. … There are huge swaths of our community that have been left behind. What we’re doing now is moving forward to ensure that we can extend those protections to people that in the past we’ve unfortunately not worked as hard as we can to protect.”

For communities with little resources or support from their cities or counties, Vega said starting with a safe space for the community can go a long way.

“You have to start somewhere,” he said. “You can start having meetings in your living room. Just let people come in, have snacks, have a talk, build a sense of community, and once that starts growing, you can start advocating.”