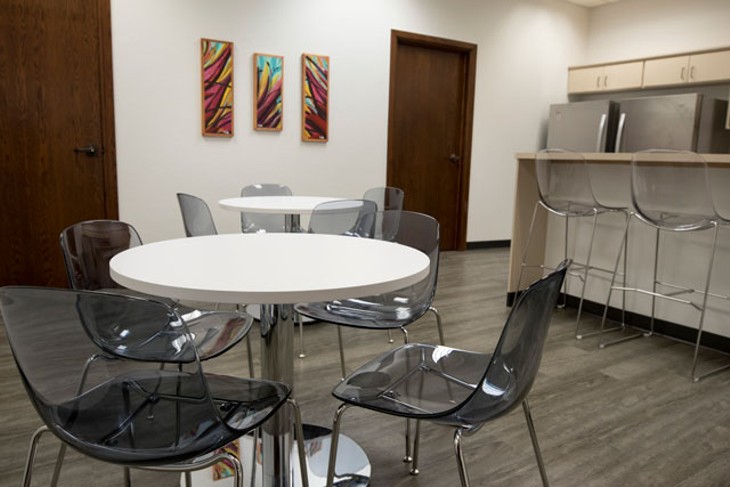 In more office spaces around the country, “co-workers” aren’t necessarily working for the same company, or even in the same industry. At Vault 405 in downtown Edmond, farmers, oil companies, consulting businesses, a geologist and a Presbyterian church all have offices and work side by side. Part of the appeal of shared office space, said Vault 405 project coordinator Marla Lance, is the convenience and lower initial expenses when compared to renting traditional dedicated office space.

“It gives you all of the office amenities that you would need, but you don’t have to sign up for a lease,” she said, “and you don’t have to have long-term commitment or the cost of adding all your stuff. Wi-Fi is included, there are utilities included in your monthly payment, and so I think it gives people a less expensive option, especially for startups and entrepreneurs.”

One thing all the people working at Vault 405 have in common, besides a mailing address and Wi-Fi password, is they’re all customers at Citizens Bank of Edmond. Citizens Bank president and CEO Jill Castilla was inspired to turn an empty office building into the co-working space after visiting Rise community offices in New York City to record a podcast. Vault 405, which hosted an official ribbon-cutting ceremony March 1, also features a podcast recording studio. Though Lance said the customers utilizing Vault 405 have not been utilizing the studio — which includes four headphone and microphone sets, a Zoom audio recorder and an iMac with a 27-inch monitor — she said upcoming monthly equipment training sessions will hopefully encourage local businesses to start podcasts. Vault 405 also includes two conference rooms with 65-inch high-resolution screens and a presentation room with a large projector screen that can be rented by nonmembers. Nonprofit businesses with accounts at Citizens Bank can use these spaces free of charge. Monthly memberships are available at several levels, with individual personal workstations with locked storage renting for $275 a month and private offices starting at $400 with six- or 12-month contracts. Office and desk rentals come with unlimited coffee and tea; high-speed Wi-Fi; conference room access; mail service; admission to workshops, classes and networking events; and printer, copier and scanner access.

Currently, businesses utilizing the offices at Vault 405 include Payne Exploration Company, Broncho Land and Investments, Leamark, Rollow Farms, web and branding consultants Unknown.Studio, interior designers Modern Whimsy, consulting and strategy firm NxtLevel Solutions and local grocer and food distributor Urban Agrarian, which Lance said plans to open a retail space in Vault 405 later this year. According to its website’s mission statement, Vault 405’s ultimate objective is to foster businesses to expand until a desk or even an office in a shared working space is no longer sufficient to meet their needs.

“We want our members to evolve from day pass holders to co-working members, from personal stations to private offices and from private offices to owning their own spaces,” the site reads. “Our goal is to help you outgrow Vault 405.” 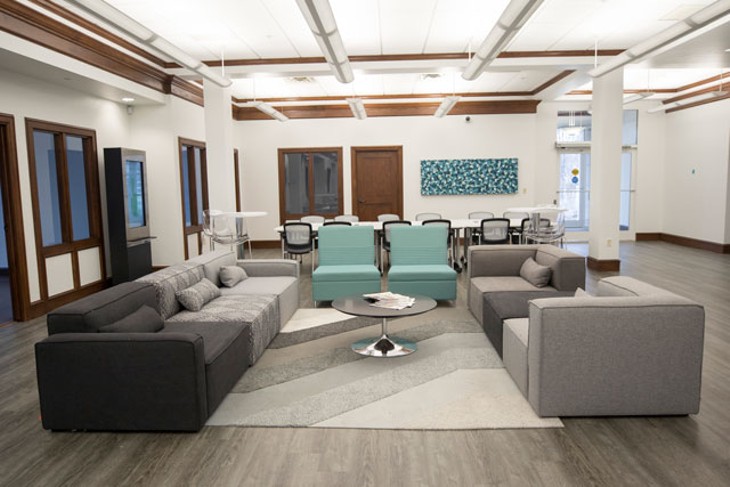 Outside New York City, Vault 405 also drew inspiration from similar spaces closer to home, Lance said, including 36 Degrees North in Tulsa, Rise Coworking in Moore and StarSpace46 in Oklahoma City. Uniquely to Vault 405, Lance said, the association with Citizens Bank offers clients a chance to meet with bank employees onsite to discuss financial matters. But beyond banking, the variety of businesses sharing the same space offers networking opportunities that can be beneficial to everyone.

“Like, if you know somebody that needs a website, ‘Hey, we know these guys and they work at the same place I work, and here’s their business card or here’s their information,’” Lance said. “Just being able to encourage each other but also maybe utilize each other’s businesses as well.”

As the internet allows more people to work from home, many have realized there are distinct disadvantages to doing so.

“I’ve heard a lot of people say, ‘Man, I work at home and I’m just getting really lonely or bored,’” Lance said. “It’s hard to work at home. So we’re building that type of community here, and networking possibilities for them has encouraged their businesses all the more because they see more benefits of meeting new people and getting trainings and events that they can go to and learning more about how to maintain a small business or how to do social media for your business and getting that type of involvement where they can’t get that at home. They just want a space they can go that they know that other people are there.”

“Even when I was working in this building before people were actually moving in, I thought, like, ‘OK, when are these guys moving in?’” she said. “I was getting a little lonely down here. So it’s just kind of nice to know that other people are around and they’re people that you can also maybe work with in the future.”