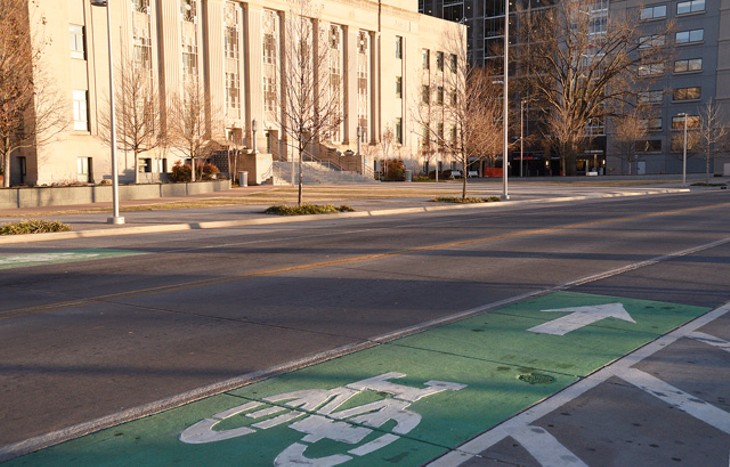 As a runner with strong connection to Oklahoma City’s running and fitness circles, Mark Bravo has his finger on the pulse of the city’s health and wellness, including its dark days when it ended up on national lists for “least active” cities in America.

The introduction of public walks and runs were key in encouraging residents to get active, he explained.

“The Oklahoma City Memorial Marathon and others like it have really created a wellness initiative where people wanted to get out,” said Bravo, the business developer at OK Runner. “They saw that they could do it. It didn’t matter where they were in their physical fitness. They could do it. Livable streets make it easier to do just that.”

The transportation policy Livable Streets, also called Complete Streets, might appear to be an odd point to raise in a discussion on health and wellness. While the term “livable streets” might be mostly unknown to the general public, its principles and benefits typically find favor amongst residents.

It’s a concept with growing favor in urban communities, including Oklahoma City, where there are signs of the livable streets philosophies woven into the city’s transportation structure. Outside City Hall, green bike lane markings along Walker Avenue ensure cyclists’ safety. Around the city, many bus stops are located in places with sidewalk connections. Through the MAPS 3 program, the city has constructed a dedicated bike and walking trail connecting Lake Hefner to the Oklahoma River as well as a separate trail connecting Lake Overholser to the river. More is on the way.

Recently, OKC voters approved the Better Streets, Safer City initiative, which calls for investing over $1 billion into the city’s infrastructure, including streets, sidewalks and transit. This month, the city council cemented its support for the livable streets transportation policy through the passage of a Livable Streets resolution. When it comes to the city’s redesign and improvement of streets, building a system for all will be a top priority, when appropriate, city leaders said.

Bravo views the city’s commitment to livable streets as a “powerful next step” in building a healthier city as well as a safer city.

“The initiative will allow more thought towards walkers and runners, but also bike trails,” Bravo said. “The default will no longer be cars.”

For years, OKC’s streets and roads were mostly for one thing: moving vehicles around quickly and safely. In the last decade, OKC leaders have approached streets differently. Could streets also serve pedestrians safely? What about other vehicles, like bicycles? The concept known as Livable Streets or Complete Streets began to infiltrate the city’s planning department.

In 2015, the city’s leaders passed PlanOKC, the city’s first comprehensive plan since 1977 created to guide policy, infrastructure and planning decisions for the future. Tucked inside the 422-page document was a philosophy to look for opportunities for complete or livable streets. Even the first bullet point under “Big Ideas,” reads, “Develop a transportation system that works for everyone.”

Following a biannual review of PlanOKC — the first update since the plan’s adoption — planning leaders endorsed adding the Livable Streets principles to the document. Additionally, planning leaders promoted the Livable Streets resolution, later adopted by the council. The resolution recognizes the city’s “commitment to a built environment that facilitates healthy lifestyles and safe active transportation options such as walking, cycling and public transit,” according to a memo to the council from City Manager Jim Couch.

Livable Streets’ strong connection to improving public health has drawn the interest of American Heart Association — Oklahoma City and the Oklahoma chapter of the Alzheimer’s Association.

“What research is telling us right now is what’s good for the heart is good for the brain,” said Randle Lee, director of advocacy and strategic partnerships for the Oklahoma chapter of the Alzheimer’s Association, when asked about the association’s support of Livable Streets. “We are very much looking at it from a standpoint that Alzheimer’s is the sixth leading cause of death. There is no way to prevent it, cure it or even stop it. Yet, what we are trying to do is educate the public that you may be able to delay the onset by living a healthy lifestyle.”

Living a healthy lifestyle can be as simple as taking a brisk walk each day, Lee explained. Sidewalks running parallel to streets and pedestrian signals at intersections can go a long way to ensure pedestrian safety but also motivate people to get out for that walk or run.

Livable Streets will provide opportunities for everyone to walk or bike to a destination, whether they are headed to a job, school, a restaurant or a local shop, said Steven Embree, director of communications at the American Heart Association — Oklahoma City.

Lee believes Oklahoma City’s commitment to livable streets could serve as an example to other communities as well as the state. According to the National Conference of State Legislatures, 25 states, as well as the District of Columbia and Puerto Rico, have adopted policies related to Complete Streets.

Key to the ongoing discussion around livable streets is public support, Lee said.

“It is one thing to build it and create it,” Lee said. “If nobody is really promoting it, especially those of us who have a stake in it, then there really are no benefits that can be garnered. It is up to us as the nonprofit community — as advocates — to preach the gospel of using those livable streets.”