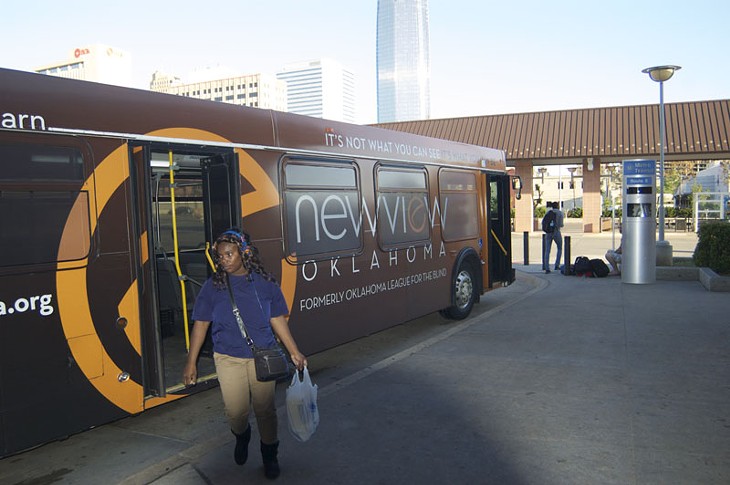 Kevin Jones sat alone on a bus bench at the downtown transit center around 7:30 p.m. But he wasn’t waiting for a city bus.

“I’m waiting for my girlfriend to pick me up,” Jones said.

Even if Jones were waiting for a bus, one would not be coming.

Public transportation in Oklahoma City shuts down before 8 p.m. each weekday as the city lacks evening service. Oklahoma City is the largest city in America without it. Based on research by Oklahoma Gazette, it is only one of three — Tulsa and Wichita — of the 50 largest cities to not have buses that run until at least 10 p.m.

The lack of evening service presents a challenge for the city’s system, which recently rebranded itself as Embark in an attempt to attract new riders. However, it also creates issues for many of those like Jones who already rely on bus transit.

“I’d love to work evening hours at work because I can make more money,” Jones said about his downtown warehouse job. “But I wouldn’t have a way to get to or back from work.”

Jones said he is moving to Fayetteville, North Carolina, next month, where he will also depend on bus transit. Despite being one-third the size of Oklahoma City in population, Fayetteville’s bus system runs until 10:30 p.m.

“That will be nice,” Jones said.

The cost of service

Like most decisions at City Hall, expanding bus service into the evening comes down to cost.

“The issue with public transit is so complex because of the size of the city,” Ward 6 Councilwoman Meg Salyer said. “I think with each budget cycle over the last few years, we have tried really hard to make some enhancement that will make public transit more rider-friendly for everybody.”

Transit officials told the city council last month that running its core bus routes until midnight would cost an additional $1.5 million annually. Members of the city council have expressed an interest in finding a way to pay for at least some of that expansion, and it appears likely that at least a few routes will be approved for night service.

City Manager Jim Couch issued a memo to the council last week reporting an extra $1.9 million in city revenue for the next budget year. He suggested using some of that money to hire more police officers but believes there is enough to spend an additional $1.3 million to improve transit, which would include evening service on a few routes and increase frequency.

“That’s a baby step, but its important,” Salyer said about the proposal.

“Within this year ... we will probably be able to provide for some evening service,” Greenwell said.

Greenwell said in addition to expanding evening service, he would also like to see the city increase frequency on some routes and possibly add Sunday service.

“It becomes a question of which is more important,” Greenwell said. “I think we would say it all is, but we have to pick.”

“If your goal is to increase ridership, your biggest impact is always going to be increasing frequency,” said Shadid, referencing conversations with local transit officials. “We want to address that, but right behind that is [adding] evening transit service.”

Shadid said the city should look for ways to grow its ridership but expanded service is also good for those residents who rely on city buses.

“[Expanded service] opens the possibility of employment for many people,” Shadid said.

Oklahoma City might lag behind other cities when it comes to public transit, but the city has made strides in recent years. Last year, City Hall, which accounts for 57 percent of transit funding, pushed an extra $1 million to public transportation. The Central Oklahoma Transportation and Parking Authority rebranded its bus system this year and plans to add technological improvements, such as mobile apps and digital signage.

“I think we have more of an understanding of how important [transit] is,” Greenwell said. “I think we are seeing it as an important aspect of the city.”