Since that 2007 election, city staff has worked to widen roads, resurface streets, improve parks, renovate aging fire stations, construct new libraries and public buildings, purchase new buses and more. Much work remains to be done, as about half of the city’s bond projects are complete. It will likely take the city three to four more years to close out the bond program.

Despite nearing the program’s end, OKC is far from meeting all of its infrastructure demands. City leaders know that better than anyone as annual citizen surveys point to inadequate streets and their office phones ring with resident complaints over everything from potholes to public safety.

The reality is the city needs another bond program because of new issues that have arisen since the 2007 election, Ward 8 Councilman Mark Stonecipher said during a recent special meeting dedicated to the planning of a 2017 general obligation bond program.

The first-term councilman often receives constituent calls and emails about road concerns. If the road is not listed as an upcoming 2007 bond project, Stonecipher suggests it could be included in the upcoming bond package. Constituents then ask when the project would start, and the answer, “two to three years after an election,” doesn’t always suffice.

“There is a critical need,” he said.

Stonecipher and other Oklahoma City Council members are dedicated to bringing a 2017 general obligation program before voters on Sept. 12. Over the next 10 months, the nine-member council will spend much of its time focused on developing a bond program that could be the largest proposal in the city’s history and have a resounding impact on its future.

Since 1989, Oklahoma City has funded thousands of capital improvement projects through voter-approved general obligation bonds. The bonds are a tool to raise funds for specific projects that otherwise would not be funded through city revenue. Sales tax supports the city’s operations.

When voters approve bond propositions, the city is allowed to borrow up to the amount listed on the ballot and pays back the bonds by collecting property taxes. Oklahoma City has a 14.81 mill levy, which translates to 13 percent of collected property taxes going to city government. Over the past 27 years, city leaders have vowed to keep tax rate at 16 mills. (A mill levy is the tax rate applied to assess the value of a property. A mill is one-thousandth of a dollar.)

Earlier this month, each member of the council was delivered a list of 850 infrastructure projects totaling $1.86 billion for consideration in the upcoming bond program. The list was generated from city staff and initial citizen recommendations.

As neighborhoods submit project ideas and citizens weigh in at eight workshops, the list will likely grow. Councilmembers are expected to make final decisions on specific bond projects in the spring, after February council elections.

During a Dec. 13 special meeting, City of Oklahoma City finance director Craig Freeman told the council that a bond program could range anywhere from $400 million to $1.4 billion, depending on the bond term and property tax rate.

Traditionally, the council has been glued to a property tax rate around 16 mills, but with a swelling list of infrastructure needs, some councilmembers are open to increasing the tax rate either one mill or two mills.

“We can’t artificially hold ad valorem taxes where they are and expect to keep up with the growth that is happening,” Ward 4 Councilman Pete White said in support of raising the tax rate.

Raising the tax rate on a $150,000 home to 18 mills would raise a property owner’s tax by $31, to $279 annually, according to figures released by the city. City staff does not recommend the council pursue raising the tax rate to 20 mills because it would negatively impact the city’s financial management record.

A few councilmembers support raising the rate, while others question the impact during a down economy. Mayor Mick Cornett and Stonecipher recommended residents be asked about tax rates in addition to possible projects during upcoming town halls and neighborhood meetings.

Perhaps a big question both the council and residents will have to answer is how quickly they want to see improvements and how willing they are to see their taxes rise.

“Our property tax is very low compared to the rest of the country,” Ward 2 Councilman Ed Shadid said. “I think there is room for increasing it. … It allows us to move into a five or seven-year bond [program] as opposed to 10 years, which means it is 10 to 12 years later before projects are complete. No one in this room can possibly know what Oklahoma City’s needs are 10 years from now. This allows us to be more adaptable.” 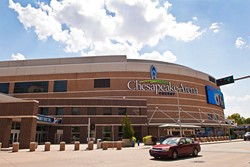 The public can weigh in on infrastructure projects and city needs during these free workshops.