If there’s one thing Oklahoma Citians agree on, it’s that panhandling and homelessness is a problem.

For over a year and a half, leaders of VOICE (Voices Organized in Civic Engagement) OKC stood ready to tackle the multifaceted issue. The coalition of religious leaders, nonprofits and other various groups created a proposal calling for a holistic approach to solve the issues of the homeless and people who panhandle. With involvement from the City of Oklahoma City, the group believed that by educating the public, it would impact the number of drivers handing donations to people holding cardboard signs, reducing the number of people standing on city medians.

VOICE OKC’s plans ended Dec. 8. No longer will the group pursue an education campaign to direct people to give to social service organizations and support The Curbside Chronicle. Plans to study the homeless and people on the verge of homelessness were also squashed, along with any future help to launch new programs tackling panhandling in the same ways as Albuquerque, New Mexico, where panhandlers came off street corners when the city provided day jobs.

Following Oklahoma City Council’s approval of a controversial median safety ordinance, VOICE OKC moved on to another cause.

“They made their decision when they decided to reject [VOICE OKC’s] proposal and approach the issue in a different way,” said Sundra Flansburg, VOICE education fund president.

Flansburg and other members of VOICE OKC urged the council to reject the ordinance, which they viewed as harmful by criminalizing activities that homeless and poor people rely on to survive. During the meeting’s public comment period, the group supported the council deferring the ordinance’s vote to June. That would allow the group to begin its education campaign with the city’s support. The vote to defer the ordinance failed 6-3, with council members Meg Salyer, James Greiner, Larry McAtee, John Pettis Jr., Mark Stonecipher and Mayor Mick Cornett voting against it.

Solving the issues of homelessness and panhandling is now up to the council, Flansburg said.

“I think the next step is on them,” Flansburg said. “We will sit back and see what they do.” 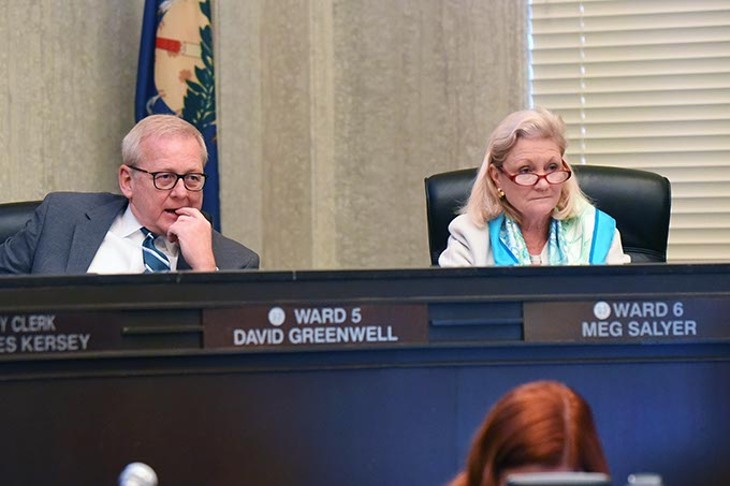 Beginning Jan. 7, it is illegal to stand, sit or stay on a city median less than 30 feet wide when within 200 feet of an intersection. The law exempts medians wider than 30 feet or city medians that feature benches, gazebos, park equipment or trails. Oklahoma City police can fine violators $100.

Under the new law, panhandlers and solicitors, such as youth sports teams, the Chronicle and firefighters for the Fill-the-Boot campaign, must move to the side of the road. Another exemption allows individuals to stand on medians, but they must stand more than half a football field away from the place where two roads meet.

The council approved the ordinance in a 7-2 vote with council members Ed Shadid and Pete White opposed.

The ordinance became a hotly discussed issue locally after Salyer authored the controversial ordinance to curb panhandling in September; the issue was reintroduced two weeks later as a median safety ordinance following citizens questioning its constitutionality.

Before the vote, Salyer said the bill was always intended to improve safety. The Ward 6 representative believes panhandlers on the city’s medians pose a threat for both the safety of the solicitor and drivers. Statements from Police Chief Bill Citty back her argument. Citty reported the dangers of standing on medians during the Sept. 29 and Dec. 8 council meetings.

“This proposed ordinance is a very narrow tool to help public safety,” Salyer said. “The education campaign piece is incredibly important to help citizens around our community to understand … we need to redirect, if we can, the giving. That education campaign we talked about for a year and a half with many of these people in the room is extremely complicated.

“People don’t want to be told not to give. There are many nuances of the campaign that need to be worked out.”

Rayna O’Connor, editor-in-chief of the Chronicle, doesn’t see the ordinance as a safety measure. Two years ago, the street magazine began working with vendors — many former panhandlers — to sell the latest issue of the street magazine from city medians. The publication curbs panhandling, as vendors keep a portion of the proceeds from each sale, empowering them overtime to move off the streets, into housing and, often, full-time jobs.

“We think it is pretty ironic to move people from an intersection where traffic slows down and there are crosswalks for pedestrians,” O’Connor told Oklahoma Gazette. “Now, you move people into the middle of moving traffic, which is going at higher speeds. Vehicles have no way to actually stop and engage with a person. I think that proves immensely that this is about making panhandling harder — unfortunately, making selling The Curbside Chronicle harder.”

Vendor Robert Hatcher, a former homeless man, joined O’Connor in addressing the council. Both said the ordinance was the wrong approach to the issues related to homelessness and panhandling.

“We need to put mechanisms in place that will address the root issues as to why panhandling occurs in our community,” said O’Connor, who stated the publication’s future is unclear. “We need to offer people who panhandle a better way to earn income. We need to understand the barriers people in poverty face that make employment and housing difficult to achieve without support. This ordinance does none of that.”

The American Civil Liberties Union (ACLU) of Oklahoma also expressed concerns over the ordinance and whether it violates the First and Fourth amendments. After the meeting, the ACLU announced plans to monitor the implementation and law enforcement.

Ryan Kiesel, ACLU executive director, asserted that the ordinance is unnecessary. Currently, it is illegal for panhandlers or solicitors to enter the street to accept donations.

“This would potentially create a public safety issue where none existed today. It would jeopardize The Curbside Chronicle, one of the most important and powerful tools of combating homelessness. It would create an enforcement nightmare.”

Two of the council members, Salyer and Stonecipher, believed the ordinance would not interfere with VOICE OKC moving forward with its education campaign. Prior to the vote, each expressed interest in the campaign coming to fruition.

Salyer hopes the talking point will turn into community action.

“I am incredibly grateful [for] the voices in our community who have come together to talk about the important issue of homelessness and the challenges faced by the many less fortunate in our community,” Salyer said. “My hope with all of you in this room today is that this energy turns into a real call for action.”

However, action by VOICE OKC is redirected to the criminal justice system reform. VOICE OKC hopes to educate Oklahomans on fines and fees that create prisoners of debt in coming months.

“An organized group of citizens identified an issue of concern, thoroughly researched it and then not only raised that problem with [the council], but proposed a plan,” Flansburg said. “It is frustrating to seeing the council go in a different direction.”