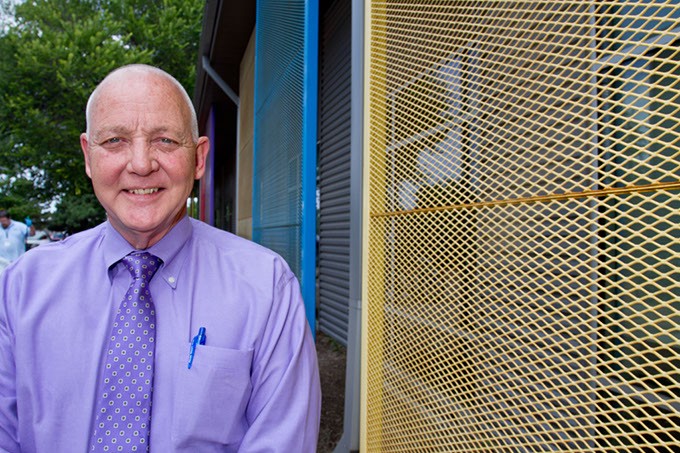 When temperatures dipped below freezing, the tent covering seemed to do very little to keep Phyllis Hinman and her boyfriend, Raymond Marks, warm. On those chilly winter nights, Hinman dug out the earth to create a fire pit and built an adobe oven to cook food.

Hinman and Marks were surrounded by the woods but were not in some remote forest miles from civilization. Instead, the two lived in Trosper Park, an undeveloped area in southeast Oklahoma City near the corner of Eastern Avenue and Grand Boulevard, a bustling intersection that seemed miles away from the remote campout.

“We just used the resources that were around us in order to survive,” said Hinman, 50, as she described collecting rainwater to use for a makeshift shower and to wash clothes.

For nearly four years, the couple was without steady work or a roof over their heads. They were considered chronically homeless, which is a classification that statistics say is the hardest to escape from.

Then, one day, a worker with Be the Change, a local nonprofit, and officers with the police department’s homeless outreach team showed up and offered help.

“We had just never asked for help before,” Hinman said. “But we soon discovered that asking for help is one of the greatest things you can do.”

With the help of a caseworker at The Homeless Alliance, Hinman and Marks gained access to important personal documents, received medical attention and moved into a modest home with updated appliances and a fenced-in yard last month.

“We both looked at each other when we saw that refrigerator and said, ‘We can have ice cream,’” Hinman said.

With a home to call their own, Oklahoma City’s homeless count dropped by two. Over the last few years, it has trended down, and those who work in the homeless community say it’s proof that important programs between nonprofits and the city are working.

An annual count of the city’s homeless earlier this year showed 1,300 homeless individuals across Oklahoma City, which is a decrease of 12 percent. However, officials with The Homeless Alliance say the true number of those living without a home is likely closer to 5,000.

The count also showed a decrease in the city’s chronic homeless, which is a term for those who have been homeless for at least a year or have experienced four episodes of homelessness over the past three years. The chronic homeless count was down 14 percent compared to the previous year and 32 percent down since 2013.

Straughan said the decrease is especially exciting since various homeless agencies have joined forces over the last few years in a strategic way to end chronic homelessness in the city. That collaborative effort was on display when Hinman and her boyfriend were given a chance to leave the streets.

“They showed us that if we just accept their help and be in their program, that life was going to be better for us,” Hinman said. “We went from spending the hot, long summers, the harsh rain and cold nights we have been through to having our own place to call home.”

Straughan started The Homeless Alliance 11 years ago and said he has seen the community become more collaborative in its effort to end homelessness in recent years.

“There are somewhere between 80 and 100 government, faith-based or nonprofit entities working with the homeless in Oklahoma City, and a decade ago, those folks didn’t even know each other, let alone work together,” Straughan said. “If there is ever a silver lining to the number of disasters Oklahoma City has seen, it is that they have really taught the nonprofit and faith-based community the real value in seamless collaboration.”

Working together provides a holistic approach to helping the city’s homeless population that would appear to be working when the annual numbers are considered.

“This effort to house people is a community effort,” said Kinsey Crocker, director of communications at The Homeless Alliance.

The effort to end homelessness is not just a nonprofit mission; the city of Oklahoma City has also increased its efforts, including the planning department, which works to find money and landlords to increase the number of housing options available.

“If we are talking about ending chronic homelessness, we are looking for units that can house them permanently,” said Jerod Shadid, an associate planner who oversees various homeless grant programs for the city. “We are looking at construction of more units. We also have a massive number of vacant and abandoned units in this city that are difficult to get your hands on. There are solutions to the problem, but we just need to figure out how to get our hands on those solutions.”

The Oklahoma City Police Department launched a homeless outreach team last year that has officers dedicated to helping the homeless connect with available services instead of simply arresting individuals or kicking them out of a makeshift camp.

“You can’t arrest yourself out of this problem,” Straughan said.

In just its first six months, the homeless outreach team connected 87 homeless individuals with local services, visited 138 homeless camps and took 376 calls, according to statistics provided by the police department.

Hinman said officers from the outreach team played a big role in helping her transition off the streets.

“[An officer] would come and pick us up in his squad car and take us to doctor’s appointments, and before that, we never had the opportunity to get medical attention,” Hinman said. “One of the officers also made sure we had a bus pass.”

The Homeless Alliance and other organizations have the resources to provide housing assistance, but finding landlords willing to rent to a person who had been living on the streets can be a challenge.

“You need regular old apartments that you or I would stay at with landlords who are willing to rent to people who are traditionally viewed as high barrier,” Straughan said. “Sometimes that means people with felonies, people with mental illness, people with an eviction history.”

While many landlords might be turned off by the idea of renting a unit to a person who has been homeless, Straughan said there is an advantage for the landlord.

“When they choose to rent to [our clients], they get a guaranteed rental payment and they never have to worry about the rent being late,” Straughan said. “They also get a professional staff person, a case manager, a social worker, who, if you are having problems with that tenant, instead of having to call the police, you can call the case manager. It can be a really good deal for the landlords even though, on the surface, it is not the type of client they would normally rent to.”

Shadid said the drop in homelessness can only be sustained if more housing becomes available.

“We are trying to locate more units to house people, and that’s starting to become a real issue,” Shadid said. “We are going to need that to keep the momentum we have going.”

Shadid said the city is applying for grants to construct more units, but that process can take a long time. When it comes to ending chronic homelessness for a person, Straughan said the first step is securing a place for that person to live.

“What we have found is this housing first method of addressing chronic homelessness is the best way to go,” Straughan said. “You provide the housing first, and then you provide the wraparound services. You can’t address your pancreatitis if you are living under a bridge. You can’t detox and get sober if you are living on a park bench. If our housing choices are drastically limited, we can’t take that first step.”

Hinman’s description of her new home makes it sound like a mansion when, in reality, it is most likely a modest dwelling that would not impress anyone who has never been without a home of their own before.

“The house we are in is newly remodeled with brand-new heat and air, refrigerator and stove, washer and dryer,” Hinman said. “It’s just wonderful.”

Hinman said she wants to complete an education program in hopes of securing employment, which she can focus on now that she doesn’t have to worry about collecting rainwater or cooking food in an outdoor fire pit.

“The people who helped us are just wonderful, and I can’t say enough about what they did for us,” Hinman said. “I feel like we have a chance now that we didn’t have before when we were homeless.”

Straughan said the annual data shows that the efforts over the last several years to end homelessness in Oklahoma City are working and agencies like his are becoming better at finding the right solutions.

“There is no question that it is working and it is having a clear impact on our numbers, which means a clear impact on our costs as a city to address homelessness,” Straughan said. “But it’s especially quite extraordinary when you consider the human impact and the lives that are being changed.”