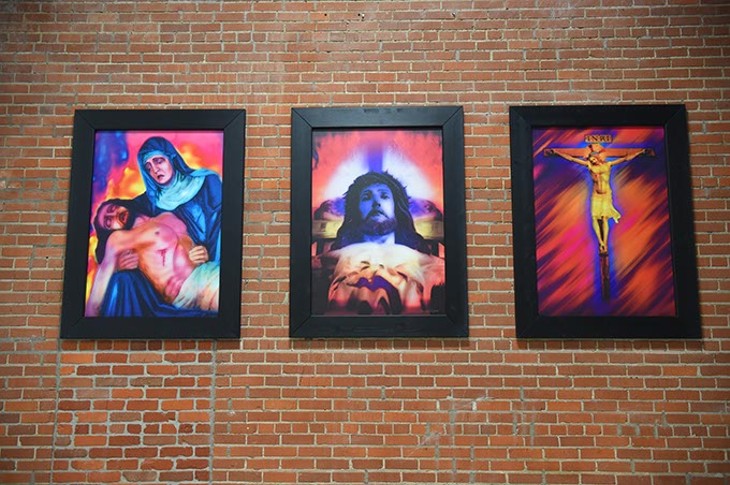 There’s something very familiar about the artwork that covers the walls of the chapel at City Rescue Mission at 800 W. California Ave.

They don’t necessarily look like the same artist created them. A series of crucifixion scenes resembles a digitized version of a medieval battle tapestry. A weeping Mary, cradling the body of her dead son, hints at cubism.

The approaches might vary, but ignore the religious themes and an instantly recognizable thread runs through each piece: These are modern interpretations of famous, centuries-old religious artworks, and German artist Werner Ritter said making sacred art accessible again is the point.

“At the time of the old masters, art was mostly used for the gospel, and the gospel gave art an important meaning,” said Ritter from his home in Aschaffenburg, Germany. “In those days, pictures were used to communicate because many people could not read, and the pictures were not at the museum, but in places of everyday life.”

Ritter said he feels like today’s culture — literacy aside — might rely on the same kind of visual stimulation that medieval citizens did. He cited the use of pictures and colors instead of text used in so much modern media as an example.

“I want to hope that the interpretation of these pictures touches people again,” he said.

Ritter, a working digital/postproduction artist since 2000, met Adam Jones, City Rescue Mission’s executive director, in 2007 while Jones was in Germany.

The two became friends and arranged for Ritter to stage a series of exhibitions at the mission. The first debuted in 2009. After four shows in seven years — his only American exhibits — Ritter decided to gift the entire collection to the organization.

The work’s effect on the chapel is startling. The pieces are huge and vibrant; some of them are so Technicolor and choppy that they look like prints Warhol would have made if he had lived through the Wars of the Roses.

Ritter also doesn’t flinch from bleak subject matter. Religious art from that period can be horribly violent (crucifixions, burning martyrs, etc.), especially by today’s standards of what’s considered public art, and he updates them without blunting any of the scenes’ visceral qualities.

The majority of Ritter’s work, however, is peaceful. One of Jones’ personal favorites is the artist’s update of Gian Lorenzo Bernini’s “Dove of the Holy Spirit,” a stained glass masterpiece that has been housed in the Vatican since 1660. Brilliantly hued with clean lines and clear focus, Ritter’s interpretation hangs at the front of the chapel, beside the stage.

“For me, it represents hope and it represents peace,” Jones said when asked how Ritter’s artwork changed the venue’s atmosphere. “I also love it because there are a lot of things competing for my attention right now, like all of us. I can be thinking about a meeting or an email I need to return or phone call I need to make, and that piece in particular serves as a visual reminder to me to be present.”

Jones echoed Ritter when asked about the vividly updated throwback art. It’s decidedly unusual in 2015 for any religious building to cover its walls with work from the 1500s, but Jones said Ritter’s skill for adaptation gives the pieces a fresh relevance.

“Anybody seeing the master works today might walk right by them,” Jones said. “It might just be a history lesson to them instead of a museum piece. But to me, when I see Werner’s art, it brings me immediately to the present.”

Jones said the reactions from the almost 700 people now housed at the mission are as varied as they would be at any other art display.

Sometimes new mission clients don’t know how to react on their first visit, Jones said, while others find the room so peaceful they use it as a place of daily reflection and respite.

Ritter, a fervent Christian, said his hope is that everyone who sees his work will see his own faith reflected on the canvases.

“I wish that all people who come to this place will be inspired,” Ritter said. “I do hope that the Holy Spirit uses these pictures as a key to the hearts of every viewer, so that every heart gets to know and understand the sacrifice of our Lord Jesus Christ.”