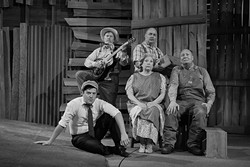 Oklahoma City Repertory Theatre stages the state’s first professional production of The Grapes of Wrath this weekend at the Burg Theatre on the Oklahoma City University campus, 2501 N. Blackwelder Ave.

The performances are part of the National Steinbeck Center’s commemoration of the 75th anniversary of the publication of John Steinbeck’s 1939 Pulitzer Prize- winning novel.

CityRep’s production of Frank Galati’s Tony Award-winning adaptation of Wrath is being produced in association with the Oklahoma History Center and the Oklahoma City University School of Theatre, whose students will appear onstage alongside veteran actors.

Director Harry Parker said that it has been an educational experience for the OKCU students.

For CityRep Artistic Director Don Jordan, it’s no surprise that Wrath has endured for so long and in so many forms — as a novel, film and play.

“It’s a work of genius whose universal resonance is shown through the very real and specific story of one Oklahoma family’s endurance, persistence and decency in the face of overwhelming hardship and is profoundly moving,” Jordan said. “While some people may be reluctant to embrace the Joads and the Okie portrait they present, I find that they exemplify the best of the Oklahoma spirit, the American spirit and the human spirit.”

Parker said that the reality of Wrath was bolstered by Steinbeck’s own experience.

“He had been in the trenches and had lived and worked with the sort of Americans he wrote about,” he said. “His fictional story of the Joads is filled with a truth that is deeper than history.”

Jordan said there has been a good deal of national interest in the production, and representatives from Actors Equity’s regional headquarters in Chicago and the national executive director for Theatre Communications Group in New York City are coming to see the show.

“I feel like this story is in the cultural DNA of our state,” Parker said. “And we bring to it a kind of understanding and authenticity that helps to illuminate the truth.”

Celebrating Wrath: CityRep’s new production conjures the ghost of The Grapes of Wrath

The Grapes of Wrath