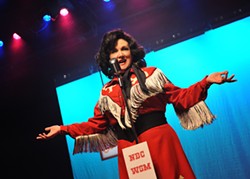 “This is a biographical journey through one singer’s extraordinary life,” Jordan said. “Patsy Cline influenced multiple generations of country music singers. Music would not be where it is today without her voice.”

A nostalgic tribute to Cline’s legacy, A Closer Walk retells the singer’s life through her music, showcasing her unprecedented transition from country to pop.

“She was most certainly one of the first women in music to take the reins of her career,” said Jordan. “Country music was a man’s world before Patsy Cline entered the scene, and she truly paved the path for hundreds of successful female artists.”

Rising to fame in the 1950s for her distinctly Nashville sound, Cline was one of the first American artists to cross over to pop music with songs like “Crazy,” “Sentimentally Yours” and, of course, “A Closer Walk with Thee.” The singer’s career spanned under a decade, but Jordan said A Closer Walk captures her powerful influence on American music.

“We might not have Dolly Parton, Reba McEntire or LeAnn Rimes without Cline’s music,” he said. “Even more compelling is her life behind the music. The play is really very moving because of its focus on her journey, trials and triumphs depicted equally.”

Starring Julie Johnson as Cline and Steve Barcus as multiple figures in Cline’s life, the small but mighty musical has captured the nation’s attention.

While Johnson emulates Cline’s heartfelt vocals and unique ability to adapt to different genres, Barcus plays the piano live onstage while switching from role to role. The show also features a live band.

“This is widely known as the ‘the biggest small musical’ due to the two-person cast size but a larger-than-life story,” Jordan said. “It’s the combination of a really fresh play and amazing talent that draws people to the theater.”

A longtime friend of Johnson, Jordan attests to her affinity for dynamic vocal abilities throughout her career — she has covered a vast range of territory.

“Alongside all of the Broadway, off-Broadway and national shows and tours, she actually used to be the voice of Baby Bop on Barney & Friends,” he said. “I might be biased, but Julie is truly one of the most versatile singers I’ve ever met.”

Johnson herself revealed what made Cline such a tour de force in the music industry, despite the singer’s brief time in the spotlight.

“She had a rich, deep alto voice that emoted through every single note,” she said. “You simply cannot replace or replicate that kind of talent. Patsy was truly the best country singer, and I’d be lying if I said she still wasn’t today.”

So dedicated is Johnson to her role as Cline that she even demonstrated the singer’s ability to make each note a new experience through a striking vocal run. That commitment to character won Johnson the role.

“I was the only one dressed up as Patsy in the audition, which was embarrassing at first,” said Johnson. “On the day of the audition, I walked in the room with a fringe vest, Western hat, red boots and full makeup. I didn’t regret it at all once I got the part.”

Performing in Broadway productions and national tours for several decades, Johnson has gained wide acclaim for her multiple renditions of Patsy Cline, playing the singer in two different theatrical productions. Along the way, Johnson said she has seen a cross-generational connection to Cline.

“Naturally, you have older folks who remember listening to Patsy Cline when she was on the radio, but these folks are also bringing their children and grandchildren to performances,” she said. “I’ve come to realize that Patsy Cline as a figure is just as compelling as Patsy Cline as a singer.”

Cline overcame many obstacles that might have set her career back. Thanks to A Closer Walk’s emphasis on her life alongside the music, Cline also lives on as an empowering figure for women.

“Patsy Cline started her career as a teenager from very humble beginnings and fought to establish herself as a solo act,” said Johnson. “I think this show is a tribute to her legacy as a strong woman above anything else.”

“It’s a privilege to experience this production,” said Jordan. “You’re up close and personal with an incredibly talented cast that brings the 1950s and ’60s alive through Patsy Cline. This is a very universal story of struggle and success — much like a country song.”

A Closer Walk with Patsy Cline