There is more than one Oklahoma City along 23rd Street.

In fact, there are numerous communities, each representing a piece of the city’s mosaic not always visible from the postcard images of a sparkling downtown or those in a chamber of commerce promotional video.

A 10-mile stretch of 23rd Street cuts through the hubs of OKC’s three largest minority groups and includes blocks of decay and blocks of urban renewal. 23rd Street is home to a cupcake shop that caters to uptown’s young upper class that is flowing back into the urban core, and just a few blocks down is a soul-food restaurant that serves mostly blue-collar workers getting off the bus from work.

What makes 23rd Street interesting — and possibly a true portrait of Oklahoma City — is that it’s not a melting pot of integrated communities but rather a street that is sharply segregated by race and income.

Just a few miles west, a 60-block neighborhood between Western and Pennsylvania avenues has one of the highest concentrations of Asians in the city, according to census data compiled by a joint university project called Mixed Metro.

If you were to walk along the 10-mile stretch of 23rd Street in the heart of the city, you would gain a close-up view of our city’s extremes of wealth and poverty; the multicultural communities that call this city home; and the way invisible lines have been drawn as a way to create a form of segregation that has a direct impact on a neighborhood’s economy, schools and safety.

At Hammons Automotive on NE 23rd Street, a timely car repair can be the difference between employment and a missed paycheck. The shop caters mostly to lower income customers who live in this predominantly black neighborhood and rely on a quick repair in order to avoid a missed day at work.

“There is a mentality that to cross [I-235] is to enter a different part of Oklahoma City,” said Kondo Masekela, who was interviewed at Hammons Automotive while waiting on a car. “I hope this changes, because your skin color shouldn’t matter.”

Masekela said he felt the city’s investment in urban renewal and crime prevention had yet to make it to the northeast part of town. And while he said the neighborhood appears to be slowly desegregating as other minority groups move in, the community remains mostly a black neighborhood.

Residents of the 73105 ZIP code earn an average of $29,825 a year, according to tax returns filed in 2005. That is not only more than $10,000 lower than the state average but $26,000 lower than the average individual salary a person makes in the predominately white communities west of I-235.

It’s a regular site to see some of the norhteast’s blue-collar workers grabbing lunch at A Family Affair, just a few blocks down 23rd Street from Hammons Automotive.

“We have a lot of regulars,” said Brandi Jones, who owns the restaurant with her husband. “We deal a lot with the working men in the community.”

Jones said it’s not uncommon for workers from the state Capitol to visit for lunch and she has a decent number of white customers. But she said there are many people who view crossing I-235 as a dangerous act.

“It’s because this is the black part of town,” said Jones when asked why whites might perceive NE 23rd Street to be a dangerous community. “You see more black people [in this community] than you do any other races, and they stereotype us as being violent. You get a lot of people who refuse to come to the east side because of what they hear.” While Jones said she doesn’t see her neighborhood as any more dangerous than other parts of town, Masekela said violence and gang activity is a problem.

“But that’s because of a lack of [police] presence,” Masekela said. “There are more opportunities for these young men to get into trouble over here.”

Jones also remarked on the lack of economic development in the community. Although that could change as a proposed $20 million grocery store and development is planned for the intersection of Martin Luther King Avenue and NE 23rd Street. 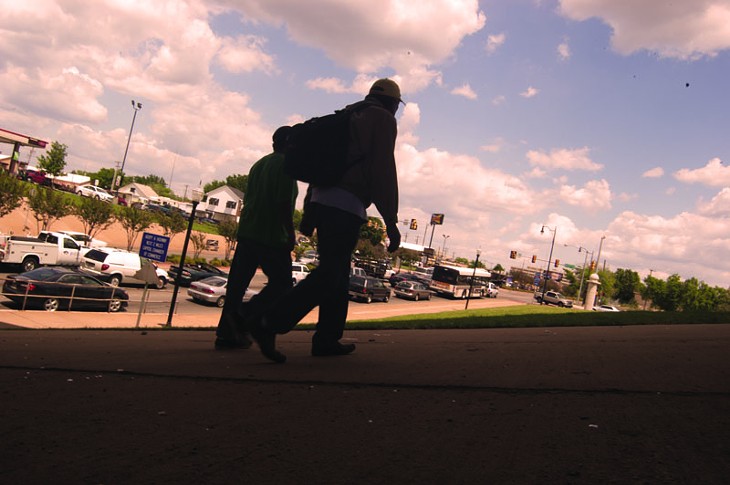 Other side of the tracks

The cultural change along 23rd Street isn’t quickly apparent as you cross under I-235 into the neighborhoods west of the interstate. There is still some grit and decay, but the business corridor that runs from Robinson to Classen has become a poster child for urban renewal as new restaurants, shops and other developments have popped up in recent years.

While NE 23rd Street is home to fast food joints, auto shops and low-income day cares, the same street west of I-235 includes trendy restaurants, food trucks and bars. The business community isn’t the only difference between the two sides; as predominantly black as the east side is, the west side of the highway is overwhelmingly Caucasian between the interstate and Classen.

“This feels like a diverse street,” said Michael Taylor, a resident of Jefferson Park, a neighborhood north of 23rd Street. “But there are different types of perspectives people have depending on which part of the street you are on. If you say you are hanging out on 23rd Street, I would think people would assume good things about this side and not so good things about [east] of the highway.”

While blacks make up the majority of residents east of I-235, less than 12 percent of the population west of I-235 along the 23rd Street corridor is African-American.

The racial disparity and income levels aren’t the only differences between each side of the interstate. Marcus Garvey Leadership Charter School and Thelma R. Parks Elementary, schools that serve the predominantly black neighborhoods along 23rd Street east of I-235, both received F grades from the state’s school report card system this year. Just a mile to the west, in the white community of Mesta Park, Wilson Elementary School received an A grade. Another mile down 23rd Street is Gatewood Elementary, where 72 percent of the students are black, Hispanic or Asian. Gatewood received a D grade.

Patterns of segregation and levels of violence and poverty being more prevalent in minority communities are nothing unique when it comes to urban life in America. Like many cities across the country, Oklahoma City is home to a multicultural population, but those different cultures tend to be segregated to different parts of the city that do not always receive the same level of services.

“Black-white segregation is a phenomenon that is dragging on and on,” John Logan, a demographer at Brown University, told NPR in an interview on his research of 2010 census data.

Logan added that American cities are still plagued by racial segregation and there is currently a growing rate of segregated Hispanic and Asian communities across the nation, along with continued segregation of African American communities.

23rd Street is hardly the only example of segregation in the region, as it merely serves as an example of the type of divides that can be found in many other places. However, a 10-mile stretch of 23rd Street offers a glimpse of the type of people who call OKC home, the way cultures tend to segregate to certain neighborhoods and the way those communities are treated differently.