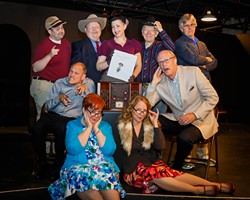 When Margie Madden’s mother was a young girl, she had a ritual. Before her favorite radio shows came on, she’d get in her pajamas, grab a mug of hot chocolate and a bowl of popcorn and settle in to listen.

“There were hundreds of different programs, hundreds of episodes,” Madden said. “I had no idea there were so many.”

Or she didn’t, at least, before she began producing Classic Radio Theatre Live! last year.

The group performs radio shows from the 1930s, ’40s and ’50s at ACTS Theatre, 30 NE 52nd St., and Madden searches for scripts, transcribes audio and designs the variety of each show.

“I’m more character-specific now,” she said. “I look for stuff with more characters and more female roles. Radio at that time was predominantly male.”

When the troupe started, they worked with a cast of about 15, but over time, they winnowed it down to about eight actors per show, De Long said. It’s more efficient, but it also allows actors more versatility.

Most shows mix mystery, science fiction, drama and comedy, but the Aug. 13 event is an all-comedy showcase.

Madden is still choosing the shows and putting together scripts.

“I think we’ll have a Rocky Fortune, The Big Show, Bob and Ray, Popeye, maybe a The Life of Riley and The Great Gildersleeve,” she said. “The fact is, not too many years ago, we didn’t have access to things like this. You used to have to order a tape or something from someone who had them archived.”

As people rediscover old-time radio programs, she said, they remember their childhoods and learn more about the past. People at Classic Radio shows told Madden they’d seen Abbott and Costello routines on TV but didn’t realize they originated on the radio.

That’s the magic of the “theater of the mind,” she said.

With just a few sound effects and voice actors, a show recreates a world in listeners’ imaginations so rich it would cost millions to reproduce visually.

“There were a lot of really popular sci-fi shows you’d think would cost a fortune to produce on TV,” she said. “And some of the content’s not really appropriate anymore.”

But the ability to listen to the original shows yields a lot of material, De Long said.

“Before rehearsing, we all go back and listen for reference,” she said. “If it’s a known property, like Burns and Allen, you need to have a pretty good impersonation. But lesser known shows, you do have some dramatic license.”

But drama will likely be the last thing on actors’ minds at the all-comedy show, she said. In the small ACTS Theatre, they listen for something only the audience can provide — laughter.

During a longer, more cerebral piece, the audience can become quiet as they concentrate on the plot or solving the mystery, she said. With comedy, the reaction is immediate and visceral.

“It’s nice to get laughs and applause,” De Long said. “That’s a pretty good drug for an actor.”

Tickets are $21.67 and include complimentary beer, wine and hors d’oeuvres.