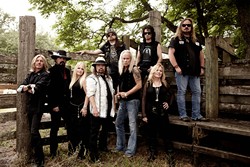 Lynyrd Skynyrd has legions of fans who can sing “Free Bird” or “Sweet Home Alabama” word for word at the drop of a hat. Yet how many can sing lesser-known hits such as “The Ballad of Curtis Loew” in front of rows of people night after night?

One lifelong fan who gets to do this is Johnny Van Zant, the younger brother of original frontman Ronnie Van Zant. For the past 30 years, it has been up to Johnny to give continuity to the trademark Skynyrd sound. When asked how he felt when he began to take up his older brother’s mantle in 1987, Van Zant had only one word: scared.

“I’m a Skynyrd fan myself,” Van Zant, now 58, said. “I wanted to make sure we did it right. I don’t know how many shows we’ve played since ’87. Then we kind of stopped [after my first tour]. We ended up in Dallas, at Reunion Arena. We stopped and went away from each other for a few months. Then we were all like, ‘Wow. It feels like the family broke up again.’ We got together and said, ‘Let’s write some songs.’”

While the elder Van Zant helped form Skynyrd and another older brother, Donnie, formed .38 Special, younger brother Johnny got his start in Jacksonville, Florida, and the surrounding area honky-tonks. Beginning with the Austin Nickels Band, Johnny was only old enough to play music in bars and not be a customer.

Van Zant worked on solo projects before and since leading Ronnie’s band as well as recording country-inspired albums with Donnie. According to Van Zant, the brothers’ country efforts are basically the same as their other works with the exception of adding steel pedals and fiddles.

When writing new material, Van Zant said Skynyrd writes songs on “anything that fits [them] at the time.”

One of the songs for which his brother and the band as a whole is most associated is iconic anthem “Free Bird.” Written in part as a tribute to deceased Allman Brothers guitarist Duane Allman, it took over three years for Van Zant to sing the lyrics to “Free Bird” on stage. During that time, the band members played the song as an instrumental and the audience sang along. In 1990, Rossington talked Van Zant into singing it.

“We were out in Sacramento,” Van Zant told Oklahoma Gazette. “I came off stage after ‘Alabama,’ and I would go into the dressing room. [Rossington] said, ‘Look, I ain’t doing this tonight, not unless you sing the song.’ ‘What? Man, I ain’t never sang it.’ That night was the first night I ever fricking sang it, and I’ve been singing it ever since.”

While “Free Bird” is much a part of Skynyrd as anything else, one element that is no longer a part of the stage décor is the use of the large Confederate “Stars and Bars” backdrop.

“I’m from the South, and I love being from the South, and I’m proud to be from the South,” Van Zant explained. “I still bring [the Confederate flag] out myself, personally. We were raised listening to Ray Charles, B.B. King and all the great blues people. We’re about as racist as a fart in a whirlwind, I guess you would say, because we’re not. We’re not at all.”

Skynyrd plays 9 p.m. Friday at WinStar World Casino and Resort, 777 Casino Ave., in Thackerville. Van Zant said the classics will be played. However, a new set list for Skynyrd Nation will also be ready.

“We’re the real deal,” Van Zant about their appeal to fans. “What you see is what you get.”