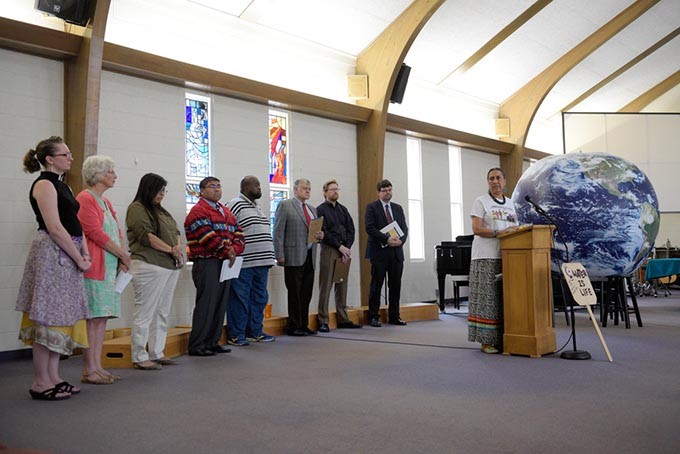 The images of thick, black, heavy crude flowing between homes and into the natural wetlands haunt Maria Todd.

Anytime the mother of three hears discussions of pipelines, her mind reels with images of the 2013 Pegasus Pipeline rupture that coated parts of Mayflower, Arkansas, she said during a recent interview with Oklahoma Gazette.

In recent weeks, the showdown between the tribe and its allies against Dallas-based oil company Energy Transfer Partners gained national attention and stirred a national environmental movement.

The tribe and Native Americans across the country are fighting against the multibillion-dollar pipeline.

News reports from North Dakota strike a chord among Todd and her family as well as many residents of Cleveland County. Houston-based Plains All American Pipeline is pursuing construction of a crude oil pipeline from Cushing to Longview, Texas. It runs through south central Oklahoma, including eastern Cleveland County, before crossing the Red River.

“I have actually seen pipelines being carried across my road,” said Todd, who lives in rural Cleveland County. “I don’t know exactly where the pipe is being laid, but I do know if there is an oil spill, it will contaminate my well water.”

Todd and her three young children lent their voices to local movement Stop the Plains All American Pipeline last week in Norman. Dozens gathered near the intersection of Main Street and Porter Avenue. Sayings like “Water is life, stand and fight,” were chanted by demonstrators in solidarity with the Standing Rock Sioux Tribe and to heighten awareness of Oklahoma’s own pipeline development.

“We have so many reasons to be out here,” said Todd, whose native heritage includes the Muscogee (Creek) Nation. “We are out here in solidarity, but at the same time fighting for our community. This gives us hope.”

Images of what Standing Rock Sioux Tribe says are historic sacred sites plowed by construction crews mixed with private security workers confronting demonstrators with dogs were followed by reports of dog attacks and pepper-spraying enlisting outrage by the American public.

Nearly a thousand miles away from that standoff, a 5.8 magnitude earthquake jolted the north-central Oklahoma town of Pawnee Sept. 3 and was felt as far away as Illinois and into parts of southwest Texas. (It was upgraded from a 5.6 after the United States Geological Survey studied comprehensive data.) It also jolted statewide discussion of safety issues surrounding Oklahoma’s oil and gas industry.

The study linked the injection of hydraulic fracturing wastewater into the ground to the tremors. In other words, many of the earthquakes are human-induced. Following the Sept. 3 earthquake — the strongest on record in the state — Oklahoma Corporation Commission required 37 wastewater disposal wells in a 514-square-mile area around the epicenter to be shut down indefinitely. The Environmental Protection Agency (EPA) followed suit and ordered 17 injection wells under federal jurisdiction stopped in neighboring Osage County. The Osage Nation tribe owns all mineral rights in the county and works with the Bureau of Indian Affairs and the EPA to regulate them. Cleveland County resident Maria Todd stands with her children and a group of demonstrators opposed to the Plains All American Pipeline running through south central Oklahoma. Demonstrators stood at Norman street corners on Sept. 7. (Laura Eastes)

Oklahoma Native American members, along with religious and environmental group leaders, pledged support to the Standing Rock Sioux Tribe during a Sept. 7 event at Church of the Open Arms United Church of Christ in Oklahoma City. Many of the nine speakers touched on the parallels between the Dakota Access Pipeline resistance and struggles to protect natural resources in the Sooner State.

“In a state being shaken by damaging earthquakes of our own making, we know firsthand the negative consequence of an unrestrained fossil fuel industry that runs roughshod over the will of the people,” Rev. Dr. Mark Davies, an Oklahoma City University professor, said during the event. “We in Oklahoma have a special moral responsibility to stand with Standing Rock to protect our earth, to protect our water, to protect our climate and to protect each other.”

Much of the Standing Rock Sioux Tribe’s contention centers on the U.S. Army Corps of Engineers — the federal agency that approved the pipeline — not properly consulting tribal leaders.

Johnson Bridgewater, Oklahoma Chapter of Sierra Club director, said it isn’t uncommon to hear a tribe was left out of the pipeline project consulting process. He believes a similar situation is unfolding with development in south central Oklahoma.

However, Plains All American Pipeline representatives have stated in Norman public meetings that letters and route maps were sent to local tribes.

“This is in our own backyard,” Bridgewater said. Members of the group Stop the Plains All American Pipeline protest a proposed pipeline to transport crude oil from Cushing to Longview, Texas, in Norman on Sept. 7. (Laura Eastes)

Last week, demonstrators chanted, “When your water is under attack, what do you do? Fight back,” as a protestor pounded a tribal drum. Demonstrators held signs that read, “Keep the oil in the soil” and “Protect our land.”

Alison Petrone, a Norman mother of two, explained that the battle against the proposed Plains All American Pipeline project began months ago. Members of opposition group Stop the Plains All American Pipeline were present at numerous Cleveland County Commission, Norman Floodplain Permit Committee and Board of Adjustment meetings discussing the pipeline project. The group has yet to see a vote in their favor as the company has secured needed permits.

Petrone believes the pipeline poses a danger for her family and others in Cleveland County. She said she objects to it because of Plains All American Pipeline’s history of regulatory violations, including a massive oil leak near Santa Barbara, California, in 2015.

“Oil companies will tell you right and left that what they are doing is the best, safest and latest in technology, but pipelines leak,” Petrone said. “It happens all the time. It will get into our water source.”

The project is 362 miles long, including 2.3 miles within Norman city limits. The pipeline route is in far east Norman on the south side of Lake Thunderbird dam, but outside the lake’s watershed, according to city documents.

The movement argues the pipeline is an example of environmental racism, a situation in which minorities are disproportionately exposed to polluted air, water or soil. The group believes the route was selected specifically to travel through Indian country and areas populated by low-income residents less able to fight the development.

Plains North American Pipeline addressed the concerns of the opposition movement in a statement:

“Plains All American Pipeline is committed to designing, constructing, operating and maintaining the Red River Pipeline in a safe and reliable manner, meeting or exceeding the required safety, design, construction and operating standards. The pipeline route was selected to minimize impact to the environment and to threatened or endangered species, and Plains has secured all the necessary access rights for the pipeline from affected property owners. We conducted the required environmental and archeological studies, and we’re constructing the Red River Pipeline under the applicable permits. We have engaged with stakeholders such as the U.S. Army Corps of Engineers, the Pipeline and Hazardous Materials Safety Administration, tribal governments and the State Historical Preservation Office as mandated throughout this process and will continue to do so as the circumstances require.”

However, movement members like Petrone say they will continue efforts against the pipeline.

“We are to the point where the people have to actually say, ‘We are not going to allow this anymore,’” Petrone said. “We have to start acting.”

Stop the Plains All American Pipeline hosts a protest outside Bank of America Financial Center, 211 N. Robinson, from 2-4 p.m. Thursday.