Science Museum Oklahoma explores the complexity of machines with Life Imagined: The Art and Science of Automata. 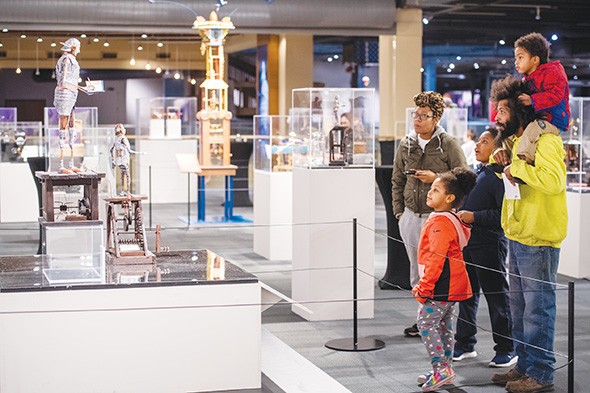 Life Imagined: The Art and Science of Automata

A clown figurine dressed in a colorful silk shirt stands next to a small table. His head gives a teasing wiggle just as he raises a feathered fan to his face. When the fan comes away, his head is magically gone — until it is revealed a second later, smiling and blinking, under a box on the table. These are the lifelike motions of a complex work of art called “Clown Illusionist.” Jean-Marie Phalibois, or perhaps his son Édouard Henri Phalibois, constructed the piece sometime around 1900.

The machine is an automaton, a clockwork-driven construction made at a time when the public was fascinated with blurring the lines between humanity and mechanics.

Guests of Science Museum Oklahoma can view this and dozens of other automata in smART Space gallery’s Life Imagined: The Art and Science of Automata exhibition. The exhibit opened Feb. 23 and continues through Sept. 29.

The word “automaton” comes from the Greek automatos, which means “moves on its own.” Creations like these are believed to be among the earliest complex machines built by civilization, beginning with the ancient Greeks and Chinese.

The golden age of automata began in the 19th century, when mechanical parts became more easily accessible and clockmakers were eager to show off their skills. Although they were often made as curiosities or toys, automata laid the foundation for modern-day robotics.

The 41 works included in Life Imagined: The Art and Science of Automata date from 1850 to today. The early pieces like “Clown Illusionist” have been loaned to Science Museum Oklahoma from the Murtogh D. Guinness Collection of Automata at Morris Museum in Morristown, New Jersey.

Alyson Atchison, associate curator of smART Space, said she visited the Morris Museum and attended last year’s AutomataCon to prepare for the exhibition, meeting many contemporary artists in the process.

She pointed out that the exhibition’s antique automata all conceal how they function, which at the time added to the illusion of machines mimicking humans.

One 1875 piece, “Conjurer” by Édouard Henri Phalibois, features a magician in front of a mirrored wall. Each time the conjurer lifts his cups, a different object appears. The machinery is hidden in an ebonized base.

“It kind of reminds me of the Zoltar machine on Big,” Atchison said, referring to a fortune-telling animatronic that plays a key part in the 1988 film.

Atchison said there is still a strong collectors’ base surrounding both old and new automata. She believes the pieces remain relevant because of the high level of skill on display.

“When you come into the newer ones, they’re no longer relying on this mystery,” Atchison said, pausing in front of two modern automata by Jim Casey. “In fact, they are showcasing the mechanics of each piece.”

Bliss Kolb’s “Singing Bird” is a 2012 piece that features a bird atop a branch. The bird twitches realistically, flaps its wings and whistles through a moving beak. Cams manipulate levers and strings to move the bird, while a bellows produces sound.

“As long as I can remember, I’ve been drawn to machines,” Kolb said via email, “the beauty of engineering and the elegance that naturally unfolds when attention is given to pure functionality.”

Kolb said “Singing Bird” took about two years to conceptualize and construct. The hope, he said, is that viewers feel the bird’s movements are lifelike even while they’re aware it is a machine.

“Looking over the wonderful, clever works of automata throughout its history, the thing that continues to hook me is the imitation or illusion of life, an obvious machine that moves so realistically it seems to be alive,” Kolb said. “I’ve come to pay most attention to a certain specific gesture that best evokes a creature’s intention or character.”

Another impressive piece is Cecilia Schiller’s “Birdhouse.” It’s taller than a basketball goal and depicts several moving scenes. Birds fly in a circle high above the viewer. In the base, cams move a hungry bird in a nest, while a woodpecker climbs up the side.

Schiller built “Birdhouse” in 2012 with the help of a Minnesota State Arts Board Artist Initiative grant. It’s a durable piece meant for display in public spaces.

Schiller said she has always been a visual person, and in 1968, she performed well in the mechanical engineering portion of a junior high aptitude test. However, due to social mores of the time, she avoided going into mechanics. She landed in art and theater instead, working with puppets, costumes and masks.

She now brings her experience in sewing, woodworking and engineering to her work as an automata artist.

“I see it with other automata makers that I know,” Schiller said via phone. “They’re not just skilled in one area. They’re skilled in a number of areas. This allows me to use those [skills]; I don’t have to pick and choose.”

Schiller said she recently received another grant and plans on creating kits that will allow up-and-coming artists to build their own automata. She hopes to make them available on her website within six to nine months.

Chris Fitch’s 1992 work “Monarch” is also a standout. A graceful butterfly flies in a circle, propelled by cogs and string. Fitch agreed that automata creation relies on numerous skills.

“Automata seem to be having another cultural moment,” Fitch said via email. “Like opera or film, they are complex vessels for storytelling. These days, you will find them commenting on social behavior, mimicking natural gestures, telling jokes or creating dreamscapes or fantasy imagery. And at a time when the sleeves of our robot overlords are very long, indeed it is all the more important to have friendly machines you can trust.”

Because of the delicate nature and age of many of the exhibition’s pieces, live demonstrations of the automata are limited. Science Museum Oklahoma has provided video installations alongside many of the pieces so guests can see them in motion.

“We would have loved to make these where people could come through and operate them, but it would have been impossible,” Atchison said.

Visitors who want to see elements of the mechanics at work can enjoy a wall of simple machines like peg wheels, gears, ratchets and cams.

Atchison said the museum is planning to screen Fritz Lang’s 1927 film Metropolis before the exhibit closes. The movie features the maschinenmensch (“Machine-Man”), one of the earliest depictions of a robot in cinema.

The screening is tentatively set for September. During the event, Atchison said she hopes to demonstrate several of the automata in the exhibit again before it closes.

Admission to Life Imagined: The Art and Science of Automata is included with museum tickets. Admission is free-$15.95.