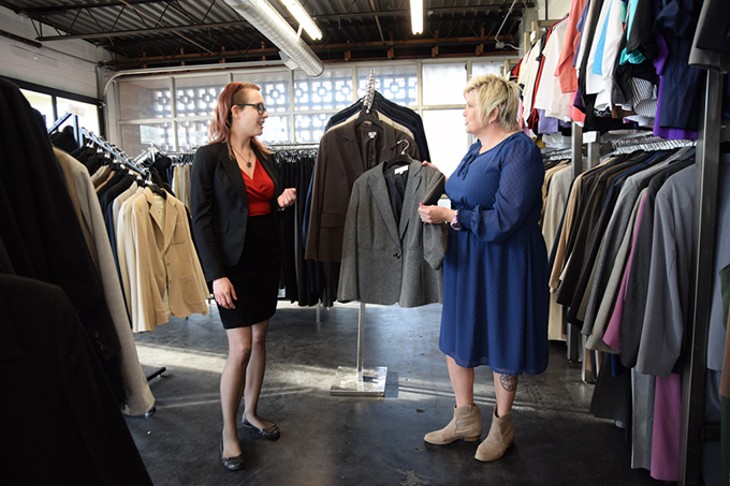 Clothes, like names, are vital signifiers of outward expression. They can make or break first impressions. But there’s always more than meets the eye, and Dress for Success Oklahoma City is no exception.

“I think what we’re best known for, or people just assume because of our name, is that we just give clothing out. Yes, we do, but it’s a very small part of our whole organization and programing,” said Alisa Trang Green, founder and board chairwoman of Dress for Success’ Oklahoma City branch.

Dress for Success receives referrals from organizations that transition recently incarcerated women back into professional life, such as the Oklahoma Department of Corrections and parole offices.

“That’s really important because we tailor programs and our style of suiting according to our demographics here in Oklahoma City,” said Green. “Every state is so different. The demographics of women we’re helping in Oklahoma are so different from … New York or Kentucky.”

Although Dress for Success is a worldwide organization, Green said each affiliate operates under its own tax identification number. Green started founding work on the Oklahoma City affiliate in 2013 after several years working for the Muscular Dystrophy Association in Oklahoma.

Green said she researched various nonprofit opportunities, especially those geared toward long-term support and follow-through. After meeting with other nonprofits and hearing stories, Green said she decided that Oklahoma City needed a Dress for Success.

“I didn’t understand why we didn’t have a program like that already,” Green said, referencing Oklahoma’s high rate of female incarceration.

She started paperwork with Dress for Success in 2013 and then spent much of the following year working with the federal government to get approval for tax purposes. Dress for Success Oklahoma City opened in May 2015 in Automobile Alley.

Over the past three years, Dress for Success grew its programming and clientele so much that the organization recently moved to a new location at 1215 N. Western Ave.

Room, parking and transportation were concerns at the old space. Green said many clients take the bus and navigating routes to the previous location presented difficulties. The Automobile Alley location also lacked space where children could play without being a distraction.

The new location is about 3,200 square feet and is conveniently located near referral agencies.

“We had to move,” Green said. “We outgrew the space. It’s a good problem to have.”

One of the key factors for the move included making space for its Professional Women’s Group, a monthly meeting that provides continued support to women transitioning into the workforce. The group is a way for Dress for Success to work toward its long-term goals of realizing a world without systemic poverty, especially as it affects women.

For Green, the group functions as a distinguishing feature of Dress for Success.

“We’re here to give information and resources, but we can’t do the work for you,” Green said. “You have to go to work every day; it’s on you.”

The group provides a space to learn job retention skills as well as other practicalities, like doing taxes. By combining continued business skills with other civic duties, Green said the program helps clients learn what the community expects from them and what they should expect from themselves.

The Professional Women’s Group emphasizes the importance of a variety of possible client needs, from attending parent-teacher conferences to checking in with parole officers.

Community and networking are two benefits of the group, providing long-term support and a space to talk about shared experiences and paths to success in the professional world.

“It’s a great little sisterhood,” Green said. “We hold each other accountable. They’re around women like them that have experienced the same things they’ve gone through.”

Women may stay in the group as long as they like. Because Dress for Success is nationwide, Green said women who move to other cities could also join a local affiliate group.

“Our long-term goal is to grow bigger, suit as many people we can, grow our Professional Women’s Group and see all the wonderful women that we’ve been able to help pay it forward as well,” Green said.

Some women in the organization have paid it forward by starting a subset nonprofit that fills purses with feminine hygiene products to distribute to women in shelters or on the streets.

“There were women who helped them, so they wanted to help other women,” Green said. “That’s what I want to see in our community: other wonderful people flourishing and continuing to help others — women, men, children, all of the above.”