Caleb Fountain uses his retail knowledge to give designer fashion a local twist at his new store, 1032 Space. 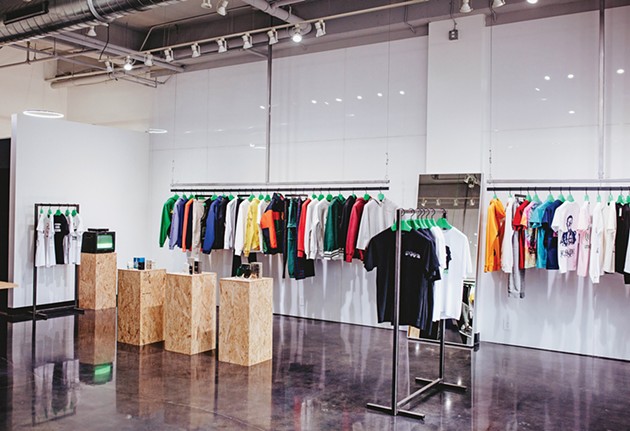 World-famous fashion houses are known precisely for their ability to stitch together the unique with the globally recognized. 1032 Space, the new Oklahoma City-based clothing store and brainchild of Caleb Fountain, is a hyper-local outpost of internationally acclaimed haute couture.

Located at 1 NE Second St., 1032 Space opened Oct. 26 after a year of preparations on the part of Fountain. 1032 Space carries a wide selection of pieces from its carefully curated selection of established and emergent brands, including Aimé Leon Dore, Helmut Lang, John Elliott and Pleasures, among others.

Although 26-year-old Fountain has spent the past several years of his life working in the retail fashion industry, fashion initially held little interest for him when it meant being dragged around the mall. As he grew older, though, Fountain became involved in the heavy music scene, which spurred his burgeoning interest in clothes.

“That comes with its own style,” Fountain said. “It’s black skinny jeans and band T-shirts, and I think being involved in a scene that was so heavy on image and style, that really went deep into what I ended up growing into.”

Fountain’s involvement with fashion continued after he graduated from college and began working at Blue Seven.

“That was the first time I’d ever been around clothes that cost a little bit more money,” Fountain said, describing the moment as a gateway into what would become his passion for designer clothing.

After working at Blue Seven, Fountain worked at The Factory, a now-closed clothing store in Automobile Alley. Fountain started as a sales associate, but after about a year, received a promotion and began work as the buyer for the shop’s selection of men’s clothing.

When he started work at The Factory, Fountain didn’t have the dream of owning his own retail store, but he soaked up all he could learn from the sales experience.

“Basically, since I’ve been out of high school, I’ve been on a retail floor, and I’ve just fallen in love with that; talking to people and being able to answer people’s questions about things, just making the connections,” he said.

Fountain gleaned the ins and outs of running a clothing business from his tenure at The Factory. By ordering from different designers, he made contacts that would become invaluable when The Factory closed in September 2017, after Ashley Liddell decided to focus on women’s clothing.

“Whenever this time came, I was three years down the road, where most people who start a new store have to start at ground zero and work [their] way up,” Fountain said. “Coming into this, we had a really good idea of what was going to work and what wasn’t. We got to build relationships with the customer base here and really help build the market that exists now.”

He set himself a one-year timeline to bring 1032 Space to life, a goal only postponed by a month since he didn’t end up finding the retail space for his store until September this year. The location had previously been a men’s clothing store, which was already outfitted with flooring, lighting and dressing rooms. Fountain and his friend Mike Montgomery, who runs the YouTube channel Modern Builds, added in new fixtures, clothing racks and a cash register desk.

During the process of establishing 1032 Space, Fountain was also working with the fashion industry’s purchasing calendar in which pieces are purchased from designers several months in advance of when they’ll be in retail shops and boutiques. He made purchasing trips in January and June for the pieces that have been for sale this fall and will be up in the next few months, respectively. He described this process as a leap of faith, trusting that everything would work out with the new store.

“My goal was one year, and I was happy with the fact that it took a year and a month,” Fountain said. “It was still pretty within my range.” 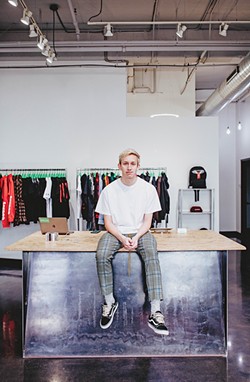 Although many of the pieces for sale at 1032 Space come from international fashion hubs like Paris or New York, Fountain selects them with an Oklahoman audience in mind, a process helped largely by the fact that he has spent his entire life here and continues to call Oklahoma home.

“I learned a lot of lessons just about Oklahoma and how we shop,” Fountain said. “It’s pretty hard to sell a coat in Oklahoma at a higher price point because we all drive everywhere. We leave our warm house, get in our warm car, drive to our destination and then we just have to walk from our car to the inside and then we don’t want the coat anymore.”

Consequently, 1032 Space carries a variety of denim jackets and hoodies but not so many heavy coats. One of Fountain’s key axioms for the store is that it carries inventory for a vast array of customers — everything from graphic T-shirts in the $35-$50 range to pants and shirts that range in price from several hundred dollars into the thousands.

1032 Space also carries brands that can’t be found anywhere else in Oklahoma, an area of the retail industry that Fountain described as “completely untapped” in the area. Part of Fountain’s mission is making fashion accessible.

He recalled going to stores when he was a teenager — some where he felt welcome, even though he couldn’t buy anything, and others where he felt alienated.

“I never wanted that to be a thing: where somebody walked in and felt like they didn’t belong in this store,” Fountain said. “It was really important to me that if a kid mows lawns on the weekends and wants to come in and shop at a cool store that feels higher-end, he can come in and buy a T-shirt, but then also if you play in the NBA and make $80 million a year, we’re going to have stuff that you like, too. It includes everybody.”

Another element of 1032 Space ties the store specifically to Oklahoma: its name.

After graduating college, Fountain lived in Norman with some friends, but when their lease came up, he didn’t know what he was going to do. He went to lunch with his grandfather — who had lived at the same address for Fountain’s entire life, number 1032. His grandfather was moving to a different house, and Fountain moved into the 1032 residence, where he has stayed ever since.

Although Fountain’s grandfather passed away two years ago, his legacy lives on at 1032 Space.

“He was a self-made businessman after he retired from the Air Force, so everyone in my family throughout this process has just been telling me how much I’m reminding them of my grandpa,” Fountain said. “I wouldn’t have been able to do any of this without the things that he put into place for me.”