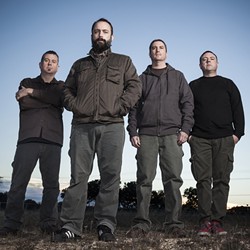 “It activates some kind of trigger mechanism that suddenly says to the brain, ‘OK, now you’re going to do it again,’” Fallon said in an interview with Oklahoma Gazette.

Moshers and headbangers alike will likely work up their own fresh batch of sweat at each of the Maryland hard rock and alternative metal outfit’s heavy sets.

Clutch performs Tuesday at Diamond Ballroom, 8001 S. Eastern Ave. It is the band’s first visit to the venue since severe weather and tornado warnings halted its May 6, 2015, date with Mastodon mid-show.

“Hopefully Mother Nature will shine on us this time,” Fallon said.

Fallon said the music business has changed a lot in those 25 years, but one thing experience has showed him in that time is how a basic passion for music should serve as the bedrock for everything.

“Music has to be its own reward,” he said. “It shouldn’t necessarily be what you think is going to take you to fame and fortune because if you look at it as a vehicle, you’re going to hit a dead end, guaranteed.”

Clutch is an independent act that started its own label, Weathermaker Music, in 2008. Before that, it released a few albums under Columbia and Atlantic music labels. Fallon said Clutch’s decision to become truly indie made, for the first time, a long, sustainable career in music seem like a manageable thing.

“Once we became unshackled from major labels and started calling our own shots, it became much more real to me,” he said. “Sometimes you can feel at the mercy of people you’ve never met before, and that can feel very disheartening for any career.”

Aside from music, Fallon is also known as a lover of books, specifically science fiction. He said recently he expanded his horizons, reading things that are not set in space. Works by Paul Auster and personal favorite Cormac McCarthy dominate his reading list.

Fallon, Clutch’s lyricist, compared his basement to the backroom of an office supply store with stacks of notebooks filled with old ideas. Despite that proficiency, he does not think lyricism and creative writing exist in the same realm.

“All the writers I admire I wouldn’t even dare to compare myself to,” he said. “I have respect for just about any writer who can create a world from a blank page because I find that very intimidating.”

Fallon said he likes writing under the confinements of rhyme and meter. He also benefits from the creative input of a full band.

At no point in the early days did Fallon ever consider Clutch would be celebrating 25 years. Like most young people, the idea that rock ’n’ roll was not a viable career option was repeatedly bashed into his head. Before Weathermaker, he said the band was often living “hand to mouth” and had little time to consider the future.

“We make a living doing this,” he said. “That’s all you can really ask for, and I think that’s its own success.”

Clutch with Zakk Sabbath and Kyng