After the Oklahoma Legislature failed to act on a promised teacher pay raise following another tumultuous year in public education, which continues to add to the historic teacher exodus and fewer state dollars for classroom education, Oklahoma City residents are embarking on a renewed debate over school funding.

Perhaps as much as anything, what’s driving the coalition to act is the notion that teacher pay and education funding aren’t being addressed at the state level. Coalition leaders believe they must find a solution. Leaders are giving a deadline for state lawmakers, who have four legislative sessions to address teacher pay and investments in education before the temporary four-year tax expires.

If more than 12,000 valid signatures are collected between now and mid-November, an OKC ballot initiative would signal a major shift in education funding. While public schools are primarily a state and local funding responsibility, it is school boards that traditionally levy local taxes for their districts, not city governments. In Oklahoma, a state that ranks low when compared to other states in investments in public education, state money accounts for half of the funding for pre-K through 12th-grade schools. Local school boards utilize ad valorem taxes, also known as property taxes, for general fund support and infrastructure.

In a time when education funding is in crisis, school boards have no avenues for raising funds for classroom instruction or teacher salaries. Districts are prohibited from collecting a local income tax or sales tax. Save OKC Schools’ proposal is a customized policy solution to fit the local environment and build a strategy for bringing bonuses to teachers.

Sixteen years ago, city leaders, with the support of voters, moved forward on a customized solution to invest in OKCPS and suburban districts in areas of capital improvements, technology and transportation. The plan was called MAPS for Kids, and city residents and others invested $700 million into 25 school districts through a 1-cent sales tax. 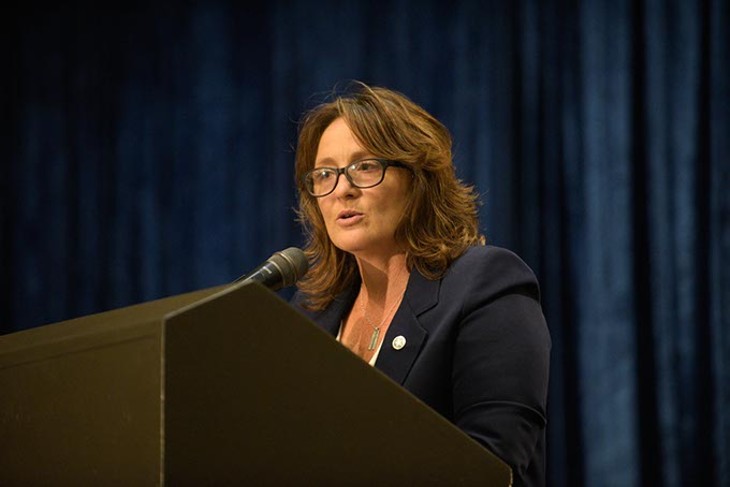 The notion of the city raising revenue once again for OKC school districts and those that serve city students has been met with criticism. Earlier this year, Shadid first proposed city funds benefiting education during Oklahoma City Council meetings where conversations about extending the city’s MAPS 3 sales tax took place. The two-term councilman, who represents a portion of northwest OKC, argued for the city sending local tax dollars to schools, which could not only improve outcomes in education but on everything from public safety to economic development.

After the council moved forward on sales tax initiatives to benefit streets and safety, Shadid convened community stakeholders and legal experts to craft the proposal, a six-page tax ordinance. Backers say they designed the policy with legal challenges in mind.

“A lot of people say what we are doing is wrong,” said Paula Lewis, who serves as the chair of the Oklahoma City Public Schools Board of Education and is a member of the coalition. “Honestly, Councilman Shadid is the only person to come forward in the last year and a half and say, ‘Let’s try to fix this. Let’s not wait on the state any longer. Let’s try to put a plug in the dike.’”

As coalition members set out to begin collecting signatures, spirits are high. Their confidence comes from a May Sooner Poll, commissioned by Shadid, in which almost 52 percent of city residents polled said they strongly support or somewhat support an initiative or proposal allocating city funds to per-pupil spending and non-administrative educator salaries.

All of this leads to one central question: Are people willing to pay a little extra in taxes each year if it keeps a qualified teacher in their cash-strapped local school?

What you need to know about Save OKC Schools tax petition

Save OKC Schools petition calls for a citywide election on whether a temporary one-half percent income tax should be collected with proceeds granted to school districts serving Oklahoma City students to provide annual bonuses to teachers and support staff.

The petition was submitted to Mayor Mick Cornett on Aug. 14. For the proposal to move forward as a ballot question on the April 3, 2018 election, it requires roughly 12,000 signatures sought during a 90-day circulation period.

There are 26 school districts that serve students who live in Oklahoma City limits. The funds would be distributed similarly to how city officials distributed MAPS for Kids. Sixteen years ago, Oklahoma City voters endorsed a $700 million second MAPS sales tax initiative to invest in OKCPS and suburban districts in areas of capital improvements, technology and transportation. By calculating the percentage of children living in Oklahoma City and which schools they attend, the city would distribute that same percentage of funds to the school district.

Who pays the tax?

The Oklahoma Tax Commission would collect the tax from Oklahoma City residents who reside in the city for more than seven months a year.

Individuals and families living near or below the poverty line would be exempt from the tax.

Registered voters who live in Oklahoma City limits only.

If voters passed the initiative, when would the tax take effect?

How much money would be generated?

According to coalition member and OKCPS Board Chair Paula Lewis, the income tax is expected to generate $50 million annually. Over a four-year period, the city could plug $200 million into local education.